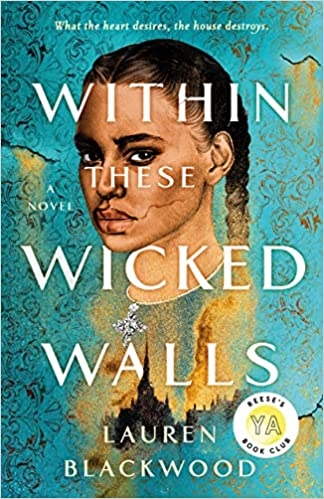 What the heart desires, the house destroys…

WITHIN THESE WICKED WALLS is a riveting YA fantasy retelling of JANE EYRE. Andromeda (Andi) is a debtera, someone who works to rid a room or house of the Evil Eye. She is unlicensed, which poses a challenge to finding work and to earning money to survive. She has been on the streets until she receives a job offer at a family castle, where the Evil Eye is particularly dangerous. Needing the money and the sponsorship it could provide to licensure, Andromeda is willing to risk her life for this job.

Once at the castle, she meets the young man, Magnus Rochester, whose parents had died years before and saddled him with this curse. He is desperately lonely and sees the young debtera not only as an employee but as a friend as well. With her protections, they may be able to have a personal connection – something that was lost to him due to the curse. Not long after her arrival at this downtrodden castle and its scattered tenants, Andromeda realizes this Evil Eye is worse than she could have imagined and death is a looming risk.

What I loved: This was an absolutely riveting and atmospheric read that pulls the reader into Andromeda’s story and invests them in Rochester’s curse. While the inspiration of JANE EYRE comes through, it’s not always obvious unless you know to look for it, and I really enjoyed that element of it – this is a unique story in its own right. The magical elements of the Evil Eye and its manifestations around the castle were deliciously creepy with the right touch of horror (and even occasionally some humor with the Librarian) that made it quite suspenseful in places.

Andromeda and Magnus were each really compelling characters with a weighted history that has shaped them into the people they are. I also found Saba really intriguing and appreciated her inclusion in the story with her own resolutions and twists. Andromeda certainly has a chip on her shoulder from a difficult childhood that taught her most people are not trustworthy and has made connections challenging. Magnus had a different childhood but was later saddled with the curse, making his own challenges toward connections and relationships. Together, there was a lot of chemistry, healing, and growth, and I loved both of their character arcs.

The themes of the story were also really intriguing around family, betrayal, lies, sacrifice, feminism, and religion. It was all thought-provoking around a carefully woven plot that made this an unputdownable and highly engaging read.

Final verdict: With compelling characters, an atmospheric setting, and masterful plotting, WITHIN THESE WICKED WALLS is a riveting and suspenseful YA fantasy retelling of JANE EYRE. Highly recommend for fans of LAKESEDGE, LEGENDBORN, and BEASTS OF PREY.

You are here: Featured Review: Within These Wicked Walls (Lauren Blackwood)