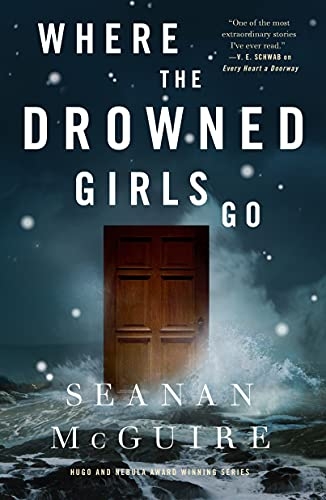 In Where the Drowned Girls Go, the next addition to Seanan McGuire’s beloved Wayward Children series, students at an anti-magical school rebel against the oppressive faculty

“Welcome to the Whitethorn Institute. The first step is always admitting you need help, and you’ve already taken that step by requesting a transfer into our company.”

There is another school for children who fall through doors and fall back out again.
It isn’t as friendly as Eleanor West’s Home for Wayward Children.
And it isn’t as safe.

When Eleanor West decided to open her school, her sanctuary, her “Home for Wayward Children,” she knew from the beginning that there would be children she couldn’t save; when Cora decides she needs a different direction, a different fate, a different prophecy, Miss West reluctantly agrees to transfer her to the other school, where things are run very differently by Whitethorn, the Headmaster.

She will soon discover that not all doors are welcoming…

After her adventures in Confection and the Moors, Cora isn’t doing well. Nightmares of the Drowned Gods won’t let her sleep, and she’s worried they could come for her at any moment. In an attempt to save herself, Cora requests a transfer from Eleanor West’s Home for Wayward Children to Whitethorn Institute, the other school for people like Cora who have gone through portals. Cora knew Whitethorn was the exact opposite of Eleanor’s school, but she didn’t expect Whitethorn to be so cruel and unforgiving. By trying to save herself from one monster, she may have inadvertently put herself in the path of a monster must worse.

I really liked Cora when she was first introduced in BENEATH THE SUGAR SKY, and I’m so glad she got another story in WHERE THE DROWNED GIRLS GO. Since the first book, readers have known another school for wayward children existed, but WHERE THE DROWNED GIRLS GO shows just how devious and evil it is. While there, Cora has to not only confront what she’s running from, but also to figure out what exactly makes someone a hero, and if heroes can become bad people if they’re put in the right circumstances long enough. Cora’s journey shows that being a hero isn’t one choice, but many small ones, every day, and those choices aren’t always (or even often) easy.

Seanan McGuire has a special talent for making you think you know where the story is going and then throwing in a jaw-dropping twist. I was fully along for the ride, thinking this would be all about Cora and the other characters’ growth and less about advancing the series plot, and then I was shocked when a particularly chilling twist about Whitethorn came out. I don’t think we’ve seen the last of those dangerous halls.

At its heart, WHERE THE DROWNED GIRLS GO is about fighting not just the outer demons, but the inner ones as well. It’s about deciding your role each day and holding your friends close enough to share hardships together.

You are here: Featured Review: Where the Drowned Girls Go (Seanan McGuire)