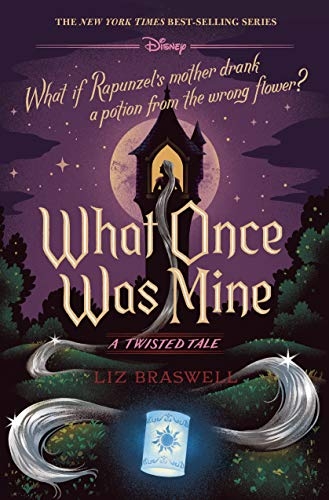 The 12th installment in the New York Times best-selling series asks: What if Rapunzel’s mother drank a potion from the wrong flower?

Desperate to save the life of their queen and her unborn child, the good citizens of the kingdom comb the land for the all-healing Sundrop flower to cure her . . . but someone mistakenly picks the blossom of the Moondrop instead. This shimmering flower heals the queen and she delivers a healthy baby girl?with hair as silver and gray as the moon. But with her mysterious hair comes dangerous magical powers: the power to hurt, not heal. For the safety of the kingdom, Rapunzel is locked away in a tower and put under the care of the powerful goodwife, Mother Gothel.

For eighteen years Rapunzel stays imprisoned in her tower, knowing she must protect everyone from her magical hair. When she finally decides to leave the only home she’s ever known—to see the floating lights that appear on her birthday—she gets caught up in an unexpected adventure with two thieves: a would-be outlaw named Gina, and Flynn Rider, a rogue on the run. Before she can reach her happy ending, Rapunzel learns that there is far more to her story, and her magical hair, and her future than she ever knew.

In Disney’s latest Twisted Tale, Rapunzel’s mother doesn’t drink from the sunflower: instead, she drinks from the moondrop flower. Instead of healing, Rapunzel now has the power to hurt and kill with her silver hair. Taken away by Mother Gothel who convinces the king and queen it’s for the safety of the kingdom, Rapunzel is raised alone in a tower, not knowing who she truly is. On her 19th birthday, after Gothel denies her request to see the floating lanterns, Rapunzel sneaks out of the tower herself, on a mission to find a thief she’s heard of who can surely get her to the lanterns without anyone being hurt. Along the way, she’ll learn more about herself, her powers, and where she really came from.

-The magic: In the Tangled movie, we only get a glimpse of the magic possible in Rapunzel’s world. In WHAT ONCE WAS MINE, we meet a full witch who helps Rapunzel understand her powers. I loved how the mystery around her hair and it’s different powers slowly unravels and how scientifically Rapunzel approached it. Likewise, because Rapunzel’s powers are so different in this story compared to the movie, Rapunzel has an additional emotional dilemma over what might happen if she leaves the tower (i.e. she could unintentionally hurt someone).

-The deeper insight to secondary characters: WHAT ONCE WAS MINE finally provides an answer to what Rapunzel’s mother was doing while Rapunzel was trapped (other than being sad). We see her grieving, but then we see her take action to help the orphanages in the kingdom and create positive reform. Mother Gothel is also fleshed out a bit, so the reader understands just how much an agent of chaos she wants to be.

What Didn’t Work for Me:

-The overarching story structure with Rapunzel’s world and the real world: I haven’t read every Twisted Tale story, but I’ve read a good chunk of them, and this is the first one I’ve read that sets the story up beginning in the real world with a brother telling his sister his version of Rapunzel in the hospital. The interruptions in Rapunzel’s story weren’t too frequent, but they were jarring every time and took me out of Rapunzel’s narrative. However, readers who enjoy stories within stories might not find it as jarring.

-Flynn Rider/the romance: In Tangled, Flynn and Rapunzel spend the bulk of the movie in each other’s company as a team of two. They have so many touching moments together, getting to know each other, and falling in love. In WHAT ONCE WAS MINE, Flynn and Rapunzel aren’t alone. They have an additional friend, Gina, helping them on the quest. While I absolutely loved Gina’s character, the new dynamic did make the Flynn x Rapunzel romance a little stilted and awkward.

WHAT ONCE WAS MINE takes an inventive spin on a fun Disney tale and adds rich magic and great insight into several of the characters.

You are here: Featured Review: What Once Was Mine (Liz Braswell)