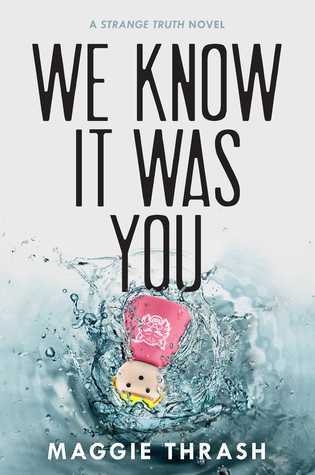 Twin Peaks meets Pretty Little Liars in acclaimed author Maggie Thrash’s new Strange Truth series. It’s better to know the truth. At least sometimes. Halfway through Friday night’s football game, beautiful cheerleader Brittany Montague—dressed as the giant Winship Wildcat mascot—hurls herself off a bridge into Atlanta’s surging Chattahoochee River. Just like that, she’s gone. Eight days later, Benny Flax and Virginia Leeds will be the only ones who know why.

Quirky Mystery, Reminiscent of the Scooby Doo Gang, Only Smaller…

We Knew It Was You is a quirky mystery with characters that are both the worst and the best at solving crimes. These characters have on emission, and that is to stop crimes–but not put themselves in danger, at least not to much.

Benny and Virginia aren’t exactly friends but they’re on the same team–of sorts. The mystery club. Benny has been begrudgingly been dubbed, “Scooby,” because of his knack for chasing mysteries–both real and false. His classmates just think he’s another dork with an irritating habit. The so called crimes he solves are minuscule but matter as much to him as any real crime would.

After facing many criticisms and wasting a lot of precious time, Benny lands his biggest case yet. A murder. Right at his school. Virginia, his fellow club member and trusty sidekick, is along for the ride with very little (no power) and a lot of sass.

While the story is just a bit on the money with the suspense and the intrigue, giving me just enough of it. It kind of excels at readability and humor. You won’t be busting at the seams but expect a hearty chuckle or two.

These characters are every bit the Scooby Doo cast. I was very entertained, and quite amused. While I thought this book would be heavier in the mystery department, it would have been better suited as a contemporary, only because for the most part it didn’t feel like a thriller.

All in all, I enjoyed this book. It was fun and entertaining and kooky–in a good way. I’d definitely continue on with the rest of the series. A perfect read for mystery and contemporary lovers alike.

You are here: Featured Review: We Know It Was You (Maggie Thrash)