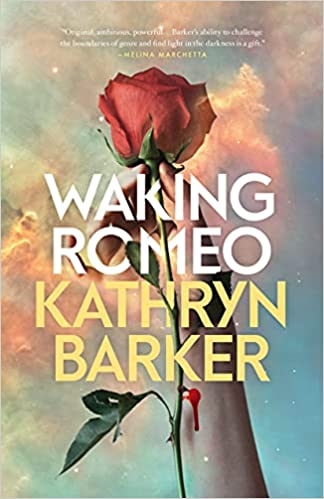 It’s the end of the world. Literally. Time travel is possible, but only forward. And only a handful of families choose to remain in the “now,” living off of the scraps left behind.

Among them are eighteen-year-old Juliet and the love of her life, Romeo. But things are far from rosy for Jules. Romeo lies in a coma and Jules is estranged from her friends and family, dealing with the very real fallout of their wild romance.

Then a mysterious time traveler, Ellis, impossibly arrives from the future with a mission that makes Juliet question everything she knows about life and love.

WAKING ROMEO is an atmospheric, dystopian YA sci-fi that I absolutely devoured. Taking place in the decimated future, Juliet Capulet has had her tragic romance play out with the boy from the rival family, Romeo Montague. The end of their whirlwind romance left her with an arm that she cannot feel and him in a coma. As members of the settlement, they are the remainders of humanity when everyone has traveled forward.

Time travel has been invented, but it only goes in one direction. With everyone heading forward in time, all the presents have been ravaged of people and a lack of caretakers. Everyone who could travel forward has already done so, meaning that they never see travelers anymore in their time. The settlement was founded by people who refused to travel forward and have built lives for themselves in this present (2083). The world is ending or has already ended – that is, until Juliet meets Ellis, a boy from the past and the future with a new kind of technology whose mission is to wake Romeo – the saving of the world depends on it.

What I loved: Told from dual perspectives of Ellis and Juliet, the book paints a portrait of humanity, both its wins and losses with the capacity for evil and selfishness often seeming to win out. The importance and value of hope and appreciation for the present are seemingly at war with humanity’s typical goals, and the struggle to get to such a place occurs throughout the story. While Shakespearean fans will certainly recognize the love story of Romeo and Juliet (which did not exist in the history of this alternate future), the book examines it critically, questioning love, relationships, and gaslighting. This was a hot take that also prompts re-examining romantic classics, seeing them in a new light.

Other themes around grief/loss, time travel and its balance, passion, life, art, and personal growth make this a really thought-provoking read. This is a book with a lot happening – and also a lot to consider. It imagines a world that often seems bleak but would not be impossible to picture – and the balance of time requires careful thought and precision. Fans of sci-fi and critical thinking around time travel will certainly enjoy this new take – it’s a tight story that is masterfully plotted.

The characters were really compelling. Juliet has been growing and does so by leaps and bounds after finding Ellis. I appreciated that, although spurred by her time with the Deadenders (Ellis and others with the ability to move both ways through time), her growth happens from internal realizations and change. Juliet critically evaluates her life, the people around her, and the stories she has told herself to craft a more full picture of her past and where she wants to be in the future. The romance is a complement to this critical growth. Ellis is a heartwarming character with a beautiful soul, and I appreciated his story as well, both his past and time with Juliet.

The story also pulls from Wuthering Heights, in addition to Romeo and Juliet, and I found the depiction and discussion around these stories and the truth of romance to be really well handled. While romance may seem hot, heavy, and all-consuming, the book also parcels apart what real love is and the pitfalls of such dangerous romance, gaslighting, and other topics that are not frequently touched upon in YA reads.

Final verdict: A twisty, time-traveling adventure, WAKING ROMEO is a thought-provoking YA sci-fi read that is sure to keep readers on their toes. Highly recommend for fans of ALL OUR WRONG TODAYS, UNCHOSEN, and AGNES AT THE END OF THE WORLD.