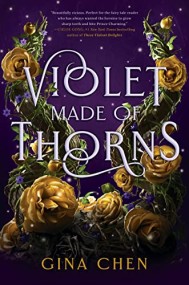 A darkly enchanting fantasy debut about a morally gray witch, a cursed prince, and a prophecy that ignites their fate-twisted destinies—perfect for fans of The Cruel Prince and Serpent & Dove.

Violet is a prophet and a liar, influencing the royal court with her cleverly phrased—and not always true—divinations. Honesty is for suckers, like the oh-so-not charming Prince Cyrus, who plans to strip Violet of her official role once he’s crowned at the end of the summer—unless Violet does something about it.

But when the king asks her to falsely prophesy Cyrus’s love story for an upcoming ball, Violet awakens a dreaded curse, one that will end in either damnation or salvation for the kingdom—all depending on the prince’s choice of future bride. Violet faces her own choice: Seize an opportunity to gain control of her own destiny, no matter the cost, or give in to the ill-fated attraction that’s growing between her and Cyrus.

Violet’s wits may protect her in the cutthroat court, but they can’t change her fate. And as the boundary between hatred and love grows ever thinner with the prince, Violet must untangle a wicked web of deceit in order to save herself and the kingdom—or doom them all.

VIOLET MADE OF THORNS is a riveting YA dark fantasy. Violet is the Seer in Auveny, a role that she accepted after she saved the Prince’s life when they were children. She had seen that it was to come, and she changed it. Not long following, the current Seer gave a cryptic prophecy from her death bed, leading the kingdom to believe that the Prince is cursed and his marriage could save them all.

Now, Violet is focused on her survival among the intrigue of court and her good standing with the king, who asks her to twist or create prophecies to strong-arm the prince into marriage. Violet and the prince, Cyrus, are enemies and they spend a great deal of time bickering, often in public. Violet begins to see the Fates in her dreams and they hand her a prophecy about the prince’s true love at the upcoming masquerade ball.

The night of the ball, everything seems to go a bit haywire, and the next morning, Violet finds herself questioning everything she knows and her own future. She has also begun to consider Cyrus as more than a rival.

What I loved: This was a fast-paced and enthralling story about love/hate, power, control, trust, integrity, and survival. These thought-provoking themes give the reader much to consider amidst the fantasy back-drop of Fates, dreams, and magic. The reader sees Violet and Cyrus as well as the explosive way they come together, while also understanding the lack of trust and rivalry that has come between them.

Violet does not always do what is right – her integrity is first and foremost for herself and for what she believes is the good of the kingdom. This certainly has not earned her any friends. Having been under the king’s thumb since she was child found on the streets, this has been her home and she will do whatever she needs to in order to keep it. While her decisions were not always what people would consider the “right” ones, they are understandable. At times, she seems the villain, because her life has brought her these tough decisions and a home for which she would fight tooth and nail, and the way that this becomes clear depending on whose perspective is compelling. Cyrus, with his narrow definition of integrity and sense of rightness, feels like the other side of the coin. While the reader never gets to see his perspective, like Violet, we see the hypocrisy at times and his parallel journey. I would be interested to see his perspective in future stories.

I was completely fascinated by the Fates and the way they play into this story. The way that the people view them and the way that they are, as gods, are at odds at times. Violet sees this juxtaposition first hand, as she too begins to understand their nature and their cruelty. Nothing is so simple as it seems at first glance. These themes around religion and the nature of humans and gods was also intriguing as it plays out throughout the story.

The romance was intense with a feeling like crashing and fighting that extended from other interactions. I was not totally sure if I bought into it at first as it seemed so sudden, but as the details are filled in, the deeper background begins to become more clear. The air of the novel felt much like a fairytale, and I loved the way that it was retold at the end in a way that made it clear the ways in which history can be twisted and infused with truths in such a way to make it practically untrue. It will leave readers reeling and eagerly waiting for the next.

Final verdict: With compelling world-building and sharp characters, VIOLET MADE OF THORNS is a consuming YA dark fantasy that questions humanity, trust, and morality. Highly recommend for fans of THESE HOLLOW VOWS, THE SHADOWS BETWEEN US, and TO KILL A KINGDOM.

Zyla and Kai
A Duel with the Vampire Lord (Married to Magic, #3)
Meet the Moon
The Second Death of Edie and Violet Bond
The Honeys
Big stuff planes, rockets, spacecraft!
Put a Lyd On It! (Wrassle Castle #3)
Dressing Up the Stars: The Story of Movie Costume Designer Edith Head
Ask the Girl
Dinos Driving
A Synagogue Just Like Home
Bear Has a Belly (Big, Little Concepts, 5)
Biscuit and the Great Fall Day (My First I Can Read)
Listen Up! Train Song (Big, Little Concepts, 2)
The Long Ride Home
Big Lies: from Socrates to Social Media
Raising Don: The True Story of a Spunky Baby Tapir
Sloth's Treehouse Inn
Koala Crossing
Frank and Bean: Food Truck Fiasco
How You Grow Wings
Coming Up Cuban: Rising Past Castro’s Shadow
Booked Graphic Novel (The Crossover Series)
Haven: A Small Cat's Big Adventure
Empty Smiles (Small Spaces #4)
The Secret Letters (Mysteries of Trash and Treasure, 1)
On the Trail (Peanut, Butter, and Crackers #3)
Elmer and the Talent Show
Millie, Daisy, and the Scary Storm
Victory. Stand!: Raising My Fist for Justice

You are here: Featured Review: Violet Made of Thorns (Gina Chen)