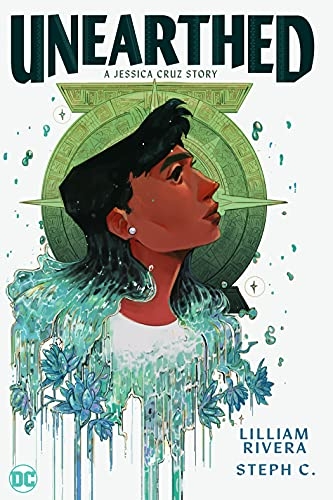 Acclaimed author Lilliam Rivera and artist Steph C. reimagine one of DC’s greatest Green Lanterns, Jessica Cruz, to tell a story about immigration, family, and overcoming fear to inspire hope. Jessica Cruz has done everything right. She’s a dedicated student, popular among her classmates, and has a loving family that has done everything they can to give her a better life in the United States. Jessica usually worries for her undocumented parents, but her fears and anxiety escalate as a mayoral candidate with a strong anti-immigration stance runs for office. As the xenophobia in Coast City increases, Jessica begins to debate if it’s worth staying in the U.S. or moving back to her home in Mexico. And despite her attempts to lean on her friends and family, she finds herself constantly visited by visions of Aztec gods, one pulling her toward hope and the other toward anger. But when her father is detained by I.C.E., Jessica finds herself being pulled into an abyss of anxiety. Despit feeling helpless with her father, Jessica must find her way out of her fears and ultimately become a voice for her community.

Jessica Cruz strives to be the perfect student, a helpful daughter, and a good friend. She’s recently started a fellowship program with a museum that houses an Aztec exhibit and feels strangely drawn to the Aztec gods. Jessica tries to do her best in all aspects of her life, because she understands how quickly her life can turn upside down if I.C.E. comes after her undocumented family. While she is a part of Deferred Action for Childhood Arrivals, she may have some protection, but her parents don’t. When her father is detained by I.C.E., Jessica is terrified and angry. She has dreams of two Aztec gods, one encouraging her anger and the other urging her to hope. Jessica must choose a path forward to protect her family and her community.

1.) The illustration: Steph C.’s use of color in this graphic novel is phenomenal. The coloring echoes the Lantern Corp colors and reveals Jessica’s conflicting emotions (though the Lantern Corps don’t make any appearance). I especially liked the use of foreshadowing with the coloring in the first scenes of the Aztec god exhibit.

2.) The powerful themes: Jessica Cruz’s story reflects the unjust circumstances many undocumented immigrants face. It also highlights the significant connection between local politics and treatment of immigrants in a community. In Coast City, the anticipated winner of the mayoral race is anti-immigrant and fuels harmful rhetoric in the community. Immigration is not just a federal topic but a local one as well, and for Jessica, the ongoing debate about immigrations directly and detrimentally harms her community.

3.) The characters: Jessica is a character you’re rooting for from the first chapter. She has a great heart and, perhaps unbeknownst to herself, the potential to be an amazing hero. I haven’t read Jessica Cruz’s Green Lantern saga in the comics, but this absolutely made me want to. I also loved the side characters of her friends and her family.

Powerful themes of immigration and community combine with stunning illustration in UNEARTHED: A JESSICA CRUZ STORY.