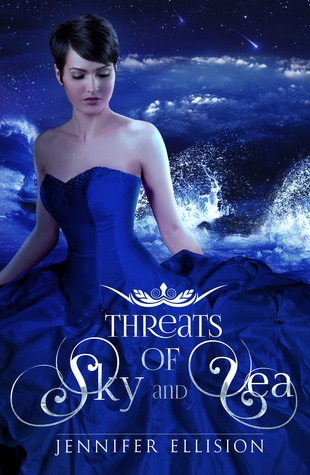 Sixteen year-old Bree has spent her life as a barmaid, innocent to her father’s past and happily free from the Elemental gifts that would condemn her to a life in the King’s army. Until the day that three Elemental soldiers recognize her father as a traitor to the throne and he’s thrown in jail—along with the secrets from his last mission as the King’s assassin. Secrets that could help the King win a war. Secrets he refuses to share. Desperate to escape before the King’s capricious whims prove her and her father’s downfall, Bree bargains with him: information for their lives. It’s a good trade. And she has faith she’ll get them both out of the King’s grasp with time. But that was before the discovery that she’s the weapon the King’s been waiting for. Now, time is running out. To save her father’s life and understand her own, Bree must unravel the knot of her father’s past before the King takes his life– and uses her to bring a nation to its knees.

Threats of Sky and Sea is a phenomenal story by Jennifer Ellison. Truly entertaining from cover to cover, it takes you on a journey in a magical and sometimes frightening fantasy world.

Bree is a young girl living a simple life with her father. They’re just townsfolk, peasants, barely getting by and leaning on each other. That is, until she stumbles across agents of the king in the forest and her entire world is turned upside down. She discovers she never really knew her father at all.

Thrust into a new role that is wholly foreign to her, she must navigate the perils of court in between visits to her father in the dungeon. The king wants something from him, needs something, and none of them could have foreseen what that something really was.

With the help of a few highborn friends, Bree discovers things about herself that put her in the center of the oncoming war. The only way to save herself and possible save people from her is to not be there at all.

The idea of elementals is nothing new. There are many many books that use it to explain magical abilities and create conflict, but Ms. Ellison has still managed to throw in enough originality to keep the reader from feeling like they’ve been there before. The characters are strong with Bree being an exciting leading lady that one only hopes has great things in store for her.

I love the writing style in the book. It’s poetic in parts, but not so flowery that the meaning is lost. A perfect combination of simplicity and expertly woven details make this world come to life and leave the reader wanting so much more.

You are here: Featured Review: Threats Of Sky and Sea (Jennifer Ellision)