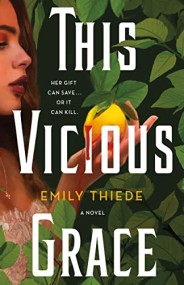 Emily Thiede’s exciting fantasy debut, This Vicious Grace, will keep readers turning the pages until the devastating conclusion and leave them primed for more!

Three weddings. Three funerals. Alessa’s gift from the gods is supposed to magnify a partner’s magic, not kill every suitor she touches.

Now, with only weeks left until a hungry swarm of demons devours everything on her island home, Alessa is running out of time to find a partner and stop the invasion. When a powerful priest convinces the faithful that killing Alessa is the island’s only hope, her own soldiers try to assassinate her.

Desperate to survive, Alessa hires Dante, a cynical outcast marked as a killer, to become her personal bodyguard. But as rebellion explodes outside the gates, Dante’s dark secrets may be the biggest betrayal. He holds the key to her survival and her heart, but is he the one person who can help her master her gift or destroy her once and for all?

“Remixing all the best parts of a dark fantasy and a romantic comedy, This Vicious Grace is a wonderfully fun time from start to finish, with lush, complex worldbuilding, intensely relatable characters, and relationships that are easy to root for.” —Hannah Whitten, New York Times bestselling author of For The Wolf

THIS VICIOUS GRACE is a beautiful and stunning YA fantasy that captured me from the start. Alessa is the Finestra, a person born once in a generation and ordained by the goddess Dea to channel and magnify power from a Fonte, someone with a specific magical gift. The Finestra and her chosen Fonte must battle the scourge of scarabeo that descend on the planet and attempt to wipe them out. Each of the chosen islands is given a Finestra in a generation, and Alessa has been trained since showing her powers about five years earlier.

Now at 18 and with the battle looming, Alessa fears her powers, as they have killed 3 Fontes who have attempted to join with her. Fontes are deserting the island and their divine duty to avoid touching her hands. A fringe religious leader is gaining traction as he suggests she should be destroyed and that her powers arise from evil rather than the divine.

After learning that her guards are willing participants in assassination plots, Alessa takes her life in her own hands and hires a boy, Dante, to be her bodyguard. As the battle looms ever closer, she will need to find a way to connect with the Fontes who have not yet deserted, control her magic, and face her fears – as well as the rebellion growing among her people.

What I loved: This was such an enthralling read, and the world-building is atmospheric and well-paced. The mythology of this world and Alessa’s powers were fascinating, and the island, its people, and culture really came to life throughout the story. The pace on the world-building was perfect with just enough revealed on the way to understand the context without overwhelming the plot. The setting gives rise to some intriguing themes around social responsibility, socioeconomic disparity, treatment of people who have committed crimes due to these disparities, and religion. With the mythology of this world being so lush, there are some really intriguing discussions around the message and the imperfections of the human translation. If dieties are perfection and their messages equally so but humans are flawed, then mistakes are possible in the way it is interpreted and practiced by said humans. It was really thought-provoking, and this is something that will be interesting to see continue to develop and play out in future books.

The main characters were incredibly compelling, and Alessa transforms throughout the story as she begins to question herself, the people around her, and the religion she holds dear. She really comes into her own as she gains confidence in herself and finds her own place amongst the chaos. Dante was everything – a broody hero with a troubled past, and he was immediately endeared to the reader and to Alessa. He is immediately lovable as someone who has turned their pain into endless empathy and understanding for anyone but themselves. He really inspires Alessa to become better than she could have alone. The Fontes also began to grow as people as the story continues, and they each evolve in the reader’s eye as they do in Alessa’s. While there are some less savory secondary characters, this is not a story that deals in black-and-white, and the character complexity reflects this.

This story was an emotional one with plenty of angst, swoon, smiles, and even tears. There was definitely a scene where I cried, and it ripped my heart out. A book that can give you all the feels is certainly one worth reading. The romance, danger, and tension kept me absolutely hooked. This was such a fantastic ride, and I absolutely cannot wait for the next installment. Of note, while the major plotlines are wrapped up in this book (no major cliffhangers), there are still some threads leading to the next book, which will make for a tough wait!

In addition to those mentioned above, themes around sacrifice, family, friendship, defining good and evil, the importance of human connection, self-confidence, survival, and teamwork were similarly compelling. Alessa has spent much of the last several years isolated and willing to sacrifice everything for survival. Her ability to connect has been stolen by a gift that often feels like a curse, and her relationships to friends and family are frequently challenged by their actions in seeing her as a tool rather than as a fellow human. In the midst of this turmoil, Alessa is beginning to take stock of herself, the people around her, and the way that she can use her powers to address the way others are treated as well. Some powerful messages about kindness and forgiveness, including forgiveness wielded as a weapon, were really thought-provoking.

Final verdict: With masterful world-building and endearing characters, THIS VICIOUS GRACE is a stunning YA fantasy that will leave the reader breathless. Highly recommend for fans of DANCE OF THIEVES, THE TIGER AT MIDNIGHT, and THE SHADOWS BETWEEN US.

You are here: Featured Review: This Vicious Grace (Emily Thiede)