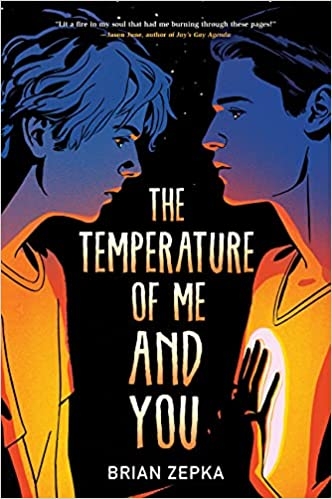 Sixteen-year-old Dylan Highmark thought his winter was going to be full of boring shifts at the Dairy Queen, until he finds himself in love with a boy who’s literally too hot to handle.

Dylan has always wanted a boyfriend, but the suburbs surrounding Philadelphia do not have a lot in the way of options. Then, in walks Jordan, a completely normal (and undeniably cute) boy who also happens to run at a cool 110 degrees Fahrenheit. When the boys start spending time together, Dylan begins feeling all kinds of ways, and when he spikes a fever for two weeks and is suddenly coughing flames, he thinks he might be suffering from something more than just a crush. Jordan forces Dylan to keep his symptoms a secret. But as the pressure mounts and Dylan becomes distant with his closest friends and family, he pushes Jordan for answers. Jordan’s revelations of why he’s like this, where he came from, and who’s after him leaves Dylan realizing how much first love is truly out of this world. And if Earth supports life that breathes oxygen, then love can only keep Jordan and Dylan together for so long.

THE TEMPERATURE OF ME AND YOU is the story of first love, and the lengths we’ll go to figure out our hearts. What starts as an electric, chance encounter at a Dairy Queen quickly evolves into a heated romance, a journey of trust and identity, and a ticking clock for survival.

THE TEMPERATURE OF ME AND YOU is an unexpected superhero-origin-style YA contemporary/fantasy. Dylan is pretty much the only person at his school that is openly out on the LGBT spectrum. Although he has his 2 best friends who are always in his corner, it can sometimes feel lonely – or even really difficult like when they try to set him up with bad dates. After one spectacular failure, as he is closing out Dairy Queen, a really cute guy walks in and orders a Blizzard.

Things quickly go awry during their meet-cute as the ice cream explodes when Jordan touches it. Their connection was real, and Dylan knows that he cannot forget about this handsome stranger. As their paths cross again, Dylan is also unable to ignore how hot Jordan is to the touch and the way he seems to literally ignite. As they begin spending more time together, Dylan finds himself coming down with some of these supernatural symptoms – and this puts a target on his back from the unscrupulous company searching for Jordan.

What I loved: This was such an intriguing blend of LGBT contemporary romance and superhero-style fantasy (keep the powers, leave the savior complex). I found the powers, their manifestation, and the way Jordan and Dylan each cope with them to be really interesting, and I appreciated the twists on what could have been an origin story. The one with the accident and experimentation is not the main character which we are following, but instead, the person who finds himself secondarily infected.

While there were supernatural problems (including a corrupt organization wanting to experiment), there were also a lot of really normal problems that make the story really relatable. Dylan is dealing with evolving friendships, bullying at school, first crush/first relationship intensities, worrying about his future career/college paths, dealing with secrets, and managing parental expectations, among other things. The relatability of these themes make this a story where the superpowers felt secondary, though remain quite interesting.

Final verdict: An intriguing YA contemporary/fantasy, THE TEMPERATURE OF ME AND YOU combines the magic of first love, deep friendships, and new superpowers into a fast-paced and entertaining read.

You are here: Featured Review: The Temperature of Me and You (Brian Zepka)