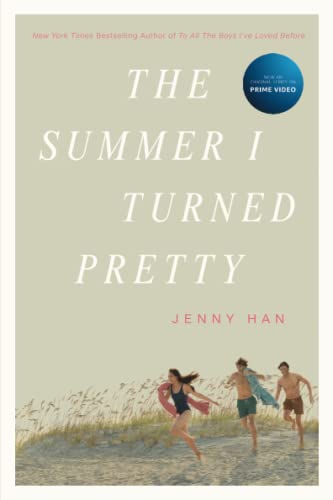 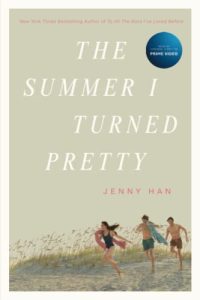 Belly measures her life in summers. Everything good, everything magical happens between the months of June and August. Winters are simply a time to count the weeks until the next summer, a place away from the beach house, away from Susannah, and most importantly, away from Jeremiah and Conrad. They are the boys that Belly has known since her very first summer–they have been her brother figures, her crushes, and everything in between. But one summer, one terrible and wonderful summer, the more everything changes, the more it all ends up just the way it should have been all along

THE SUMMER I TURNED PRETTY by Jenny Han is the novel that kicked off the Amazon Prime show of the same name. Belly, short for Isabel, vacations to Cousins, a Northeastern beach town, with her mom, her brother, and their family friends, Susannah, Jeremiah, and Conrad. This trip has been a yearly tradition for Belly’s entire life, but this summer is a bit different as Belly is growing up and turning heads. Conrad, Belly’s childhood crush, acts both disinterested and jealous, making him very hard to figure out. Unfortunately for Belly, Conrad’s mood swings aren’t the only surprises she has to contend with on this trip as navigating what it actually means to come of age is more difficult than she ever expected.

I saw the tv show before I read the book, and while I usually recommend reading the book first, in this particular case, you could really do either/or. The book version of the story is a much quieter and simpler plot with hints of what we see play out on a much bigger scale on the show. What’s most noticeably missing in the book is Steven’s main plotline from the filmic version. In the novel, Steven actually leaves Cousins early to go on a trip with his dad, whereas, in the tv show, Steven works at the country club with Jeremiah and has both relationship and money issues over the course of the first season. In the show, I really like the class commentary that comes up as a result of Steven’s actions, and more than that, he’s my favorite character in the tv version. As such, I really missed him and his personality in the book.

Obviously, a tv show has the luxury of space and time to expand events and people, so there, we get to see more of the mothers’ relationship, more of Jeremiah, more of Taylor, more of everyone, which I personally prefer as I was less interested in Belly’s POV and more interested in her relationships to those around her. I also dislike the name Belly, which has been hard to see past in both mediums. That being said, the one character I prefer in written word is Cam as he has a better beginning, middle, and end there.

Overall, what I appreciate about reading the book post-show is I have a much better sense of the characters’ motivations and what’s triggering everything that occurs because we get more backstory via flashbacks. As such, I have a pretty good idea of where they’ll go in season two of the show. In particular, the love triangle and Susannah’s sickness have a clear through line in the book, where the show seems much more open-ended as if anything’s possible.

Fans of the show will enjoy this read, and vice-versa.

You are here: Featured Review: The Summer I Turned Pretty (Jenny Han)