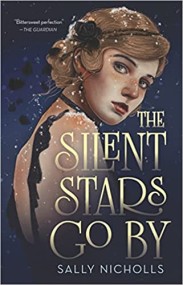 Vivid and achingly real, Sally Nicholls’s latest historical romance explores the fallout from an unexpected pregnancy during the First World War. It’s Christmastime, 1919. Three years before, seventeen-year-old Margot Allan, a respectable vicar’s daughter, fell passionately in love. But she lost her fiancé, Harry, to the Great War. In turn, she gained a desperate secret, one with the power to ruin her life and her family’s reputation, a secret she guards at all costs. Now Margot’s family is gathering at the vicarage for the first time since the War ended. And Harry, it turns out, isn’t dead. He’s alive and well, and looking for answers. Can their love survive the truth? Based on the author’s family history, this evocative and stirring exploration of the human and emotional side of war is young-adult historical fiction at its finest, written with the immediacy and understanding of the complexities of the human heart that are the hallmark of the author’s work.

Three years ago, Margot’s fiance, Harry, was listed as missing in action. Now she receives a letter saying he did survive the Great War. Margot has conflicting feelings that have to do with a big secret that she’s afraid to reveal. She’s afraid by revealing this secret that the carefully planned fiction her family has created will be torn apart with devastating consequences.

What worked: Intriguing and bittersweet at times story set in Christmas 1919 where forgiveness is put to the test. What is interesting about this story is the premise of a teen unwed mother who goes to a ‘home’ to give birth and her parents who adopt the child as their own. Margot’s conflicting feelings are so realistic. She longs to have James, her son, call her ‘mother’, but fears the retributions from her small village. Her father is the village’s vicar and she knows how his parishioners talk and judge those they deem sinful. On the other hand, she wants so badly for James to acknowledge her as his real mother. She’s torn.

Harry is her former fiance who is clueless about the situation. He does reach out to her numerous times, but she avoids writing back. Until Christmas when he comes back home.

There’s also mention of veterans who survived the Great War and the very real possibility young women wouldn’t marry due to how many men died. There are hints of what it must have been like for these young men to gather at parties, and events and go over the horrors of what they’d witnessed. I did like how Margot’s brother Stephen is portrayed and how she notices the difference after he returns from the war. Also, there is mention of young women like Margot’s younger sister Jocelyn contemplating what a future would look like for them with the very real possibility they might never marry.

The emotions are real throughout this story. I only wished for more interaction between Margot and Harry. It felt that the final reveal was rushed and the ending was too open-ended. Also, the pacing at times was a tad bit slow. The letters between Harry and Margot do pick up the tension between this couple.

At the back is a historical note on the laws regarding adoption during the Great War. How the knowledge that except in cases of neglect, these young unwed mothers could take back their child at any time was withheld from them. The guilt these young unwed mothers must have felt had to be extreme. Also, there is a note on the facts of how traumatic WWI was for the British.

Poignant with an underlying message of forgiveness and hope set during a Victorian British Christmas.
Good Points
1. Intriguing look at adoption during WWI Britain
2. Bittersweet

You are here: Featured Review: The Silent Stars Go By (Sally Nicholls)