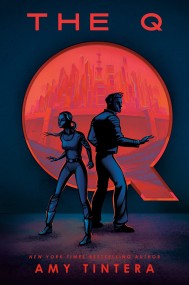 In this action-packed adventure from a New York Times bestselling author, two teenagers from opposite worlds must fight their way through a vast walled quarantine zone in a dystopian America toward their only chance for survival.
Seventeen-year-old Maisie Rojas has spent her entire life in the Q—a post-pandemic quarantine zone that was once Austin, Texas. Born and raised behind the high security walls that sealed their fate, she’s now a trusted lieutenant for one of the territory’s controlling families.

Lennon Pierce, the charismatic son of a US presidential candidate, has just been kidnapped by his father’s enemies and dropped out of a plane into the Q with nothing but a parachute strapped to his back. Lennon is given a temporary antidote to the disease and crucial intel for his father, but Maisie must get him out of the zone within forty-eight hours–or he will be permanently infected and forced to remain.

With unrest brewing both inside and outside the Q, reaching the exit is a daunting and dangerous task. But if Maisie and Lennon fail, it could mean disaster for the entire quarantine zone and its inhabitants—and could cost Lennon his life.

Strap in for breakneck action and compelling characters in this timely, nonstop thriller.

THE Q is a highly engaging YA dystopian/sci-fi. In this world, a new deadly virus arose, beginning in Austin, Texas. To contain it, they placed everyone who had the virus in the city and eventually walled it off. This trapped not only people who had been infected but also those who were too poor to leave. The virus continued to mutate and reinfect the people who lived within, and before long, there was no plan for allowing those people out of the quarantine zone or The Q. It has now been about 20 years.

Maisie was born inside The Q, one of the first generation. She lives in the South, controlled by Dr. Lopez (and formerly her father), while the North is controlled by the Spencers. They are engaged in a perpetual turf war with a bit of peace constructed by mutual fear. Lennon, the son of a presidential candidate, is kidnapped and airdropped into The Q, landing in the Neutral Zone. Lopez detects it and sends Maisie to get him before unsavory characters can, and he gives her an injection to give him, which should provide him with about 4 days of immunity from the virus.

Lennon wants out and back to his old life. The things he has heard about The Q are rather frightening, and he knows that public opinion is turning on even allowing it to continue to exist. The CDC gives him 3 days to get to the north gate and allow him to exit, assuming he has not been infected. However, with conflicts escalating inside The Q and a long path to get there, his safety seems anything but assured.

What I loved: This was such an entertaining and engaging read. While it certainly has parallels to viruses now, this presents a speculative scenario taken to extremes. There were some thought-provoking themes around politics, public opinion, morality, conflict/war, gender inequality, medical care, and poverty that really made this quite an intriguing story. The broader context of The Q and the people who have lived inside it were really provocative and ask some interesting questions about how medical care and societal engagement are impacted by wealth and public perception.

The book is told from the perspectives of Maisie and Lennon, and this balance really propelled the story. While there is a small amount of romance between them, they were each compelling characters individually. Maisie loves her friends, who have become her family, and she fiercely believes in doing what is right, even if that means she has to punch some people. Lennon has not always been the perfect son to his political parents, but he is finding his own purpose as he learns more about The Q and its residents. He also has his own moral code, which he is figuring out as he navigates this dangerous landscape with Maisie.

Other secondary characters were really intriguing as well, particularly Val, Queso, and Hadley, who each have survived their own way. The new generation of The Q is beginning to see their own desires and drive for changes they want – it could irrevocably change the future of what The Q is and how they all relate to each other (if they can move past their parents’ choices).

The plot was fast, and this is definitely an action-packed read with quite the adventure in their three-day travel from the South to the North. It was really hard to put down with so many twists and turns along the way. I am definitely interested to see what will happen next, and I definitely hope this will get a sequel. While major plotlines are wrapped up, there are definitely some threads I would be interested to follow in the future.

Final verdict: A thrilling and action-packed YA dystopian/sci-fi, THE Q takes the reader on a speculative ride with compelling characters and thought-provoking themes. Highly recommend checking this one out!

You are here: Featured Review: The Q (Amy Tintera)