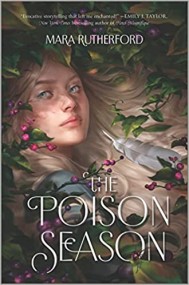 Outsiders are always given a choice: the Forest or the lake. Either way, they’re never heard from again.

Leelo has spent her entire life on Endla, coexisting with the bloodthirsty Forest and respecting the poisonous lake that protects her island from outsiders who seek to destroy it. But as much as Leelo cares for her community, she struggles to accept that her younger brother will be exiled by his next birthday, unless he gains the magic of enchanted song so vital to Endla.

When Leelo sees a young outsider on the verge of drowning in the lake, she knows exactly what she’s supposed to do. But in a moment that will change everything, Leelo betrays her family, her best friend, and Endla by making an unthinkable choice.

Discovery could lead to devastating consequences for both Leelo and the outsider, Jaren, but as they grow closer, Leelo realizes that not all danger comes from beyond the lake—and they can only survive if Leelo is willing to question the very fabric of her society, her people, and herself.

THE POISON SEASON is an enchanting YA fantasy about love, trauma, and isolation. Leelo has grown up in Endla, where the townspeople have been isolated away from the Outsiders, who they are taught are a dangerous threat. They had fled hatred and violence to escape across the poisonous lake to be with the enchanted forest. They serve the forest with magic and blood and receive protection in return.

Leelo is nearly 18 years of age, and she is struggling with her commitment to their way of life, in no small part because her younger brother, Tate, does not seem to have magic. As an incantu, at 12 years of age, he will be sent across the lake, never to return. Leelo cannot imagine her life without him, and her sorrow grows as the time for her brother’s exile draws near. Not long after he is sent away, an outside appears, in need of help. As Leelo goes against everything she was raised to believe in order to help him, her life will change forever.

What I loved: This was a haunting read that deals with generational trauma and the permeating fear that leads to unthinkable actions. The Endlans have traveled to this community to escape the violence that followed them, and fear of outsiders drives them to the present. To keep their security, they cast out children who do not have magic, marry people they don’t care for to keep the population growing, destroy anyone from the outside before they can speak to them, and perform rituals and animal sacrifices to give their blood to the woods. Other actions appear as Leelo increases her own skepticism about what is happening. Their cruelty is born of fear and pain, passed down through generations.

Leelo is a compelling character, who cares deeply for her family and community, but it is her love for these that also drives her to question the things that they tell her must happen. Even her mother’s sister holds so much contempt and hatred for her that it has passed down to her cousin – and the sinister nature of this is fully revealed later in the story. Morality is gray in this story, as they make tough decisions, which are complicated by the things they have endured.

The story is also told from the perspective of Jaren, the outsider who is fascinated by what he sees across the lake. Jaren becomes enchanted with Leelo and the Endlans, an interest which could be deadly. While his character was not as complex as Leelo, he serves to provide a vessel for love and demonstrate its power to survive and thrive in unexpected ways.

What left me wanting more: Overall, this was a really great story, and there were only a few things I had some mixed feelings about. The book feels rather slow at the start, really taking its time in getting to the reveals and action. A secret would be teased earlier on, and by the time the answer is revealed, it felt easy to forget that it had been mentioned before. I also would have liked to see Jaren’s character fleshed out more, beyond his interest in the Endlans. He did not feel as full as Leelo.

Final verdict: THE POISON SEASON is a haunting and fairytale-esque YA fantasy about fear, love, and community. Recommend for fans of SMALL FAVORS, LAKESEDGE, and THE BONE HOUSES.

You are here: Featured Review: The Poison Season (Mara Rutherford)