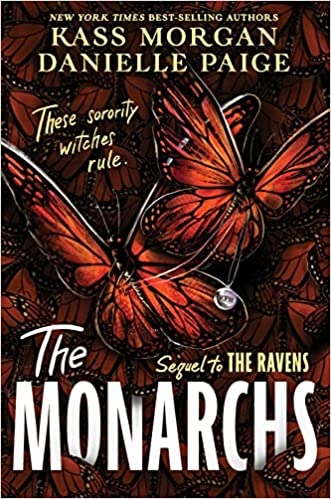 In this thrilling conclusion to New York Times best-selling authors Kass Morgan and Danielle Paige’s The Ravens duology, loyalty, love, and friendships are tested as sorority sisters Scarlett and Vivi must face the forces of hell itself when a rival sorority threatens to wreak havoc on campus.

The ultra-exclusive Kappa Rho Nu—the Ravens—are determined to restore balance to the world. After destroying an ancient talisman and barely saving their sorority in the process, they’ll go to any lengths to keep their secret as Westerly’s most powerful coven of witches.

Scarlett Winter, a legacy Raven, has finally gotten what she’s always wanted: Scarlett is Kappa Rho Nu’s newest president. Unlike her mother or older sister before her, Scarlett has a vision for a more unified Kappa, one where no sister falls to the forces of wicked magic. But the powers of the presidency have their own pitfalls. And with the pressures of alumni bureaucracy and past failures weighing on her, Scarlett finds herself at risk of losing the very thing that defined her: her magic.

As a new member of Kappa Rho Nu, Vivi Devereaux finally knows what it’s like to belong. She has her Kappa Rho Nu sisters behind her and, with Scarlett’s blessing, Vivi’s happily dating her first college crush (who also just happens to be Scarlett’s ex). When Scarlett assigns Vivi the coveted role of social chair, Vivi is determined to live up to her Big’s expectations. But Vivi’s studies in witchcraft take a deadly turn when she uncovers a new form of magic, one that has mysterious ties to Kappa Rho Nu’s past and the vengeful demon once tied to their talisman.

With the weight of their newfound roles and the terrible price of destroying the talisman haunting them, Scarlett and Vivi must save their sisterhood when the forces of hell itself and a rival sorority threaten to unleash havoc on the Ravens.

This sequel picks up right where THE RAVENS ends. Scarlett Winter is now president of Kappa Rho Nu, the exclusive sorority house at Westerly College. It’s also the place of the most powerful coven of witches. Only instead of Scarlett starting her presidency off with a bang, one mishap after another occurs. Vivi Devereaux, a freshman, gets what she’s always wanted-sisters. A chance encounter on campus has her stumble into Tim, who might very well be a half-brother she never knew about. After an opening party goes terribly wrong, Rho Nu loses the chance to host the coveted Spring Fling event on campus. The sorority finds there might be others on campus with magic who want to destroy the sisterhood. An evil that longs to be finally released.

What worked: I totally devoured this sequel in two days. Action-packed, with suspense, mystery, and of course secrets and a possible evil presence that means to destroy Kappa Rho Nu.

In this sequel, Scarlett and her little Viv are not so much frenemies as sorority sisters. Mason, Scarlett’s ex and now Viv’s boyfriend struggle to make sense of Viv’s total devotion to the sorority. And Jackson, the boy that Scarlett erased his memory of what he witnessed in the first book, now is acting strangely and wants nothing to do with her.

There’s a new threat to Kappa Rho Nu-Maria, who out of nowhere seems to have her own powers. A cute new college transfer student Xavier has his eyes on Scarlett. He also has his own secrets. And of course, the family drama between Scarlett and her mother, a former Kappa Rho Nu president.

Kappa Rho Nu’s magic is on the brink and this affects everyone, including the sorority sister’s magical abilities. Add the mystery on who might be behind all the strange things happening to not only the sisters, but the house and you have one riveting read.

You are here: Featured Review: The Monarchs (Kass Morgan and Danielle Paige)