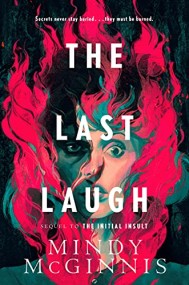 In the dark and stunning sequel to The Initial Insult, award-winning author Mindy McGinnis concludes this suspenseful YA duology as long-held family secrets finally come to light . . . changing Amontillado forevermore. Perfect for fans of Truly Devious and Sadie!

Tress Montor murdered Felicity Turnado—but she might not have to live with the guilt for long. With an infected arm held together by duct tape, the panther who clawed her open on the loose, and the whole town on the hunt for the lost homecoming queen, the odds are stacked against Tress. As her mind slides deeper into delirium, Tress is haunted by the growing sound of Felicity’s heartbeat pulsing from the “best friend” charm around her fevered neck.

Ribbit Usher has been a punchline his whole life—from his nickname to his latest turn as the unwitting star of a humiliating viral video. In the past he’s willingly played the fool, but now it’s time to fulfill his destiny. That means saving the girl, so that Felicity can take her place at his side and Ribbit can exact revenge on all who have done him wrong—which includes his cousin, Tress. Ribbit is held by a pact he made with his mother long ago, a pact that must be delivered upon in four days.

With time ticking down and an enemy she considers a friend lurking in the shadows, Tress’s grip on reality is failing. Can she keep both mind and body together long enough to finally find out what happened to her parents?

THE LAST LAUGH is a haunting and enthralling continuation of a YA thriller/horror duology. Tress is still reeling from the murder of Felicity, with guilt and her questions rising high in her mind. At the zoo with her grandfather, she has other problems rising, as the panther has escaped. While the town searches for Felicity, Tress feels it all.

Kermit has been bullied by his classmates, and they all call him Ribbit. When they create a viral video of him, the bullying escalates. Ribbit is hiding bigger secrets as he lives under his mother’s thumb, and he must deliver on a promise to her made long ago that will involve more death with the ultimate goal of living his happily ever after with Felicity – the girl who is missing.

What I loved: The writing is very atmospheric and pulls the reader in to this haunting tale quickly. The dual perspectives show two characters who are each grappling with secrets, lies, and more dangerous things. Ribbit and Tress are compelling, and their sections are each consuming. We spend just enough time in each to become entrenched in their emotions and challenges before switching to the next. Each of the teens is dealing with challenges with some largely and more deadly but others more mundane and relatable.

The book also has elements of THE TELLTALE HEART, which were interestingly transformed in this story. The connections with Poe become clear as the story continues and Tress is reliving her guilt through the heartbeat pulsing of her necklace. The plot is just as consuming and haunting as the short story.

There are some major twists and turns in this book that were unexpected, and everything is wrapped up well by the end of the book. I definitely did not see some elements of the story coming, and the journey was enthralling. Themes of guilt, family, manipulation, and secrets/lies add to the plot to make it really intriguing.

Final verdict: Haunting and chilling, THE LAST LAUGH is the surprising and atmospheric conclusion to a YA thriller/horror duology.

You are here: Featured Review: The Last Laugh (Mindy McGinnis)