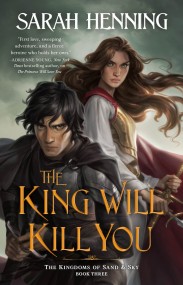 The Princess Bride meets Game of Thrones in this commercial YA trilogy from acclaimed fantasy author Sarah Henning.

Princess Amarande is finally on the verge of having everything she wants. To be with her true love Luca, no one nor law standing in the way. To rule Ardenia as queen outright, no marriage necessary, as Luca does the same with the reformed Torrence. To rebuild the continent of The Sand and Sky into a place not defined by archaic, patriarchal laws, but by the will of its people.

However, threats await in the shadows of Amarande’s hoped-for happily ever after. One expected and deadly to both her love and every one of her objectives. The other, unexpected, and arising with a vicious aim: revenge at any cost. Against the princess who killed him, the boy whose love made her do it, and the continent cruel enough to deserve his rage.

The King Will Kill You is the epic, pulse-pounding conclusion to Sarah Henning’s Kingdoms of Sand and Sky trilogy.

What I Liked: Luca and Amarande’s love is as unwavering as ever in this third installment of the Kingdoms of Sand and Sky. This is refreshing because many books would drive conflict by having the inevitable couple fight or face betrayal before ultimately coming back together. This book stays true to their love and the power they can wield together.
They start out on the precipice of everything ready to work out. Luca has defeated the fake Warlord and is ready to heal his country, Torrence. Amarande is now Queen of Ardenia without the stipulation of having to marry and can finally serve her people. They vow to stay together as they work towards progress for their people.
That all changes when it is revealed that somehow Price Renard is back from the dead and he carries the vote to keep the Patriarchy and the ancient rules intact so that Amarande cannot rule her country. Then the other newly appointed kings agree that it is too dangerous to have Luca and Amarande marry and unite their power. Amarande is completely frustrated at the stonewalling she is receiving due to her gender and not her abilities.
They must also face that her mother is determined to keep her power as Warlord in Torrence and plans to kill Luca. Surrounded by loyal friends, Luca and Amarande must face these roadblocks by outsmarting and outfighting them. Their plan to defeat the Warlord and Renard comes with surprising tragedies that will keep you turning the pages to find out how it will all work out.
What Left Me wanting more: The fun references to the movie, The Princess Bride, was not as much a part of the story as it was in the first book. The themes of the patriarchy and the lack of a women’s self-determination became the main focus of this storyline making the action stall out a bit in places as Amarande dealt with the mental and emotional toll it was taking on her.
Final Verdict: It was fun to revisit these characters in this third installment of the series. It became more than just a fantasy story as it addressed gender inequality and stood up to the idea that ancient traditions no longer serving the people should be stopped.

You are here: Featured Review: The King Will Kill You (Sarah Henning)