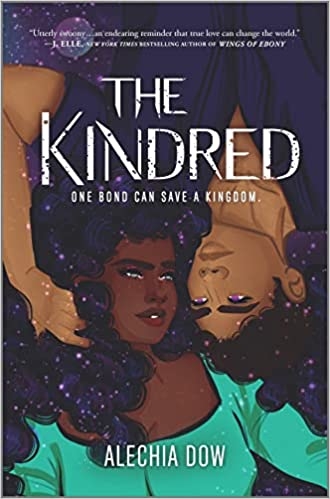 To save a galactic kingdom from revolution, Kindred mind-pairings were created to ensure each and every person would be seen and heard, no matter how rich or poor…

Joy Abara knows her place. A commoner from the lowly planet Hali, she lives a simple life—apart from the notoriety that being Kindred to the nobility’s most infamous playboy brings.

Duke Felix Hamdi has a plan. He will exasperate his noble family to the point that they agree to let him choose his own future and finally meet his Kindred face-to-face.

Then the royal family is assassinated, putting Felix next in line for the throne…and accused of the murders. Someone will stop at nothing until he’s dead, which means they’ll target Joy, too. Meeting in person for the first time as they steal a spacecraft and flee amid chaos might not be ideal…and neither is crash-landing on the strange backward planet called Earth. But hiding might just be the perfect way to discover the true strength of the Kindred bond and expose a scandal—and a love—that may decide the future of a galaxy.

Seventeen-year-old Joy Abara, a Hali commoner, and Felix Hamdi, a royal playboy are Kindreds. They come from totally different backgrounds but share one thing. At birth, they were linked together as Kindreds. They share all their thoughts and also intense feelings. Joy knows she can never be anything more than a Kindred due to her humble birth and she tries hard to deny her feelings for Felix. Then there’s a royal family assassination and someone is out to kill Joy. They accuse her of plotting the deaths. Felix ends up rescuing her and after they flee the planet they end up crashing on Terra-Earth. These encounters are hilarious at times as they seek help to get away from hunters that mean to kill Joy.

What worked: This is a fast-paced, engaging Sci-Fi that stretches from the Monchuri system to Earth. The relationship between Joy and Felix is filled with angst and tension as they both at first deny their true feelings for each other. Joy is betrothed to Maxon, someone of a higher station who will help her and her mother out of poverty. Felix wants to play in an intergalactic rock band, only he gets sick on stage.

The story comes to life once they crash on Earth. There are some humorous scenes when they encounter their first Human, who passes out. Joy likes being on Earth. Felix though wants to get back and help his captured parents. And then a secret is revealed that causes him to rethink his life and true purpose.

The romantic tension builds throughout the novel. Add some alien assassins, royal secrets, court intrigue, and the possibility of an intergalactic war. Especially funny are Joy and Felix’s first encounters with Earth culture. This includes a shout-out to some YA popular authors and of course a love of Taylor Swift.

You are here: Featured Review: The Kindred (Alechia Dow)