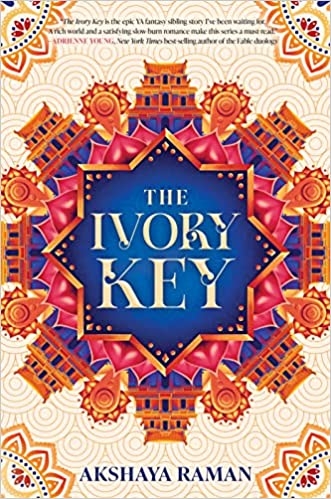 THE IVORY KEY is a lush YA fantasy that transports the reader to a world on the verge of war. The young Maharani, Vira, is trying to run the country of Ashoka, but its most precious resource, carefully mined from the quarries, is running out – soon, they will be without magic. The people are already rebelling, with the Ravens stealing from the rich to give to the poor, and their neighbors in Lyria have taken advantage of the weakening magic along their borders to invade and conquer.

After her hope for a political union dies with her murdered fiance, Vira grasps at anything to save her country – but what she really needs is more supply of magic. When she realizes her fiance was killed over a secret part of a map she had heard about from her history-buff, treasure-hunting father, she decides to set out to find the Ivory Key that will help to find more magic quarries. Although her siblings have been scattered following her ascension, they all join her on her quest – with their own motives and secrets. Riya has been with the Ravens, Kaleb has been falsely imprisoned, and Ronak bears his own burdens – and tricky dealings. As they work together, they must confront their pasts and face the dangers that lie ahead, together.

What I loved: This was a really lush and beautifully plotted YA fantasy. The world-building is really fantastic with glimpses into the politics, religion, and history of this fascinating world. The book is told from the perspectives of each of the siblings, who have their own slants on the way they view the current state of things, and I appreciated the inclusion of each, helping to understand the characters but also the ways of this world. Each of the siblings was compelling and flawed in their own ways and were each fully realized characters. I particularly felt for Kaleb, whose views on his family and himself have been challenged during the time of his imprisonment, but who is also looking for his own place in the world, believing in honesty and goodness. There is also a touch of romance among two of the other siblings with other characters, whose perspectives are not given, but I also loved the ways those were developing. In their romances, we see more of their flaws, vulnerabilities, and the importance of trust, relationships, and loyalty.

There are some really great themes around family, complicated relationships among family, duty and its burdens, politics, freedom, racism (implied that the neighboring country is marked by differing skintone), and wealth. The complexity of the decisions being made and goals that seemed so black and white gives depth to the characters’ choices and paths along the way. The relationships between the siblings really shone in the story, as did their complex feelings about their parents and the ways that they fit into the world, being thrust into politics at a relatively early age. Each of the siblings is evolving and growing during the story, and I appreciated each of their arcs, which do seem that they will continue into the sequel.

I also want to give a nod to the ending and the twist that I did not fully see coming. The wait to the second book is going to be so difficult! I love being surprised, and this one definitely surprised me and left me reeling. I am unbelievably curious to see what will happen next.

Final verdict: With fantastic world-building and deep characters, THE IVORY KEY is an enchanting YA fantasy about family, politics, and personal growth. Highly recommend for fans of THE TIGER AT MIDNIGHT, AN EMBER IN THE ASHES, and SPIN THE DAWN.

You are here: Featured Review: The Ivory Key (Akshaya Raman)