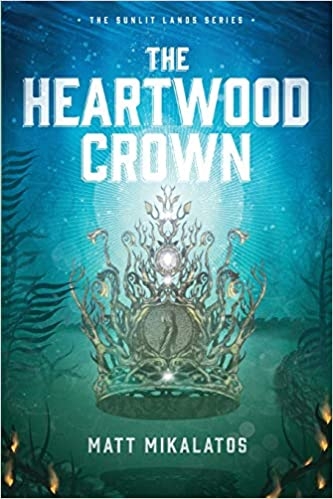 After destroying the Crescent Stone, Madeline returns home, bringing Shula and Yenil with her. As her health continues to deteriorate, Madeline feels the Sunlit Lands calling her back. Meanwhile, Jason, Darius, and the rest of the inhabitants of the Sunlit Lands fight for survival and freedom. The magic that fuels the land is failing, threatening to destroy them all. Will Madeline’s return save the land and its people? Matt’s signature humor and epic storytelling are once again on full display in The Heartwood Crown.

What I Loved: Each of our characters is faced with a problem requiring personal growth, and that can be painful.
Madeline’s health continues to deteriorate and each person in her orbit must come to terms with her impending death. As the pain mounts Madeline realizes that the kindness she has been known for wouldn’t be believed by anyone who didn’t know her before. She has a choice with how she will die.
Shula is trying for Madeline’s sake to adjust to life in America. She keenly feels the loss of her family. She struggles with caring for the child Yenil. She wants to harden her heart so she can never again feel the pain of losing someone. However, Yenil slides past all her defenses. She has a choice to continue to burn or to let it go and be free.
Darius is in a constant internal battle evaluating why in America he let throw away racist comments slide and didn’t fight injustices for himself. Yet, he is willing to fight and kill to free the Scim from their oppressors, the Elenil. His thirst for vengeance and the pursuit of justice could leave him with lifelong regrets. He must choose which shackles to throw off.
Jason is wanted dead by a lot of powerful groups in the Sunlit Lands. He is constantly surprised that Baileya is his fiancé and protector. He must face his own worthiness for love and forgive himself of past crimes of which he has wrongly sentenced himself guilty. It is time for him to choose to take charge of his story.
It is very clear from the start what Madeline’s role in this book will be. It is funny how hope keeps everyone, including the reader, from facing this truth. Being an epic fantasy, I kept waiting for the magical save or the last-minute fantastical reversal of fate. Yet, the cycle of life comes for us all and Madeline has the rare chance to die for a cause. Her death can be the catalyst for change that she was hoping for when she chose in the first book not to make a sweeping gesture by killing the Archon. Her death can lead to the systemic change needed to have more justice in the Sunlit Lands for all its inhabitants.

Final Verdict: This story is once again layered. There is the fantastical adventure in the Sunlit Lands that fans of Narnia will love. It is humorous because Jason’s character is the shining light in the story. Yet, it is thought-provoking and hard-hitting on big topics such as systemic racism and injustice. Once, the people in the Sunlit lands were all humans seeking safety from war and oppression. Over time they divided themselves and gave themselves names like Zhanin, Kakri, Elenil, Scim, Pastisians, and Alluvoreans. There became the people deserving and those deemed inherently inferior. This book uses the fantastical lands of the Sunlit Lands to explore what divides humanity on Earth. There are so many meaningful quotes or bits of wisdom that would make this a perfect book for a book club or class discussion.

You are here: Featured Review: The Heartwood Crown (Matt Mikalatos)