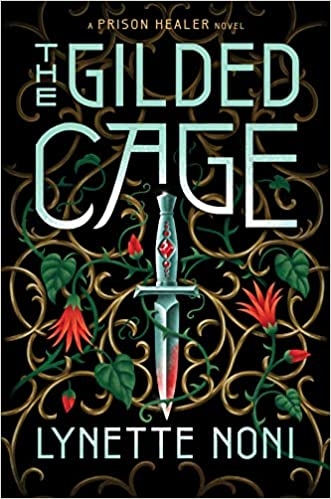 Kiva trades one cage for another when she leaves behind a deadly prison for a deceptive palace in this dark and dangerous sequel to The Prison Healer, which Sarah J. Maas called “a must-read.”

What Worked: Gilded Cage is the fast-paced sequel to the Prison Healer. Kiva’s head and heart are at odds with each other. Her heart is falling in love with Prince Jaren. He is so giving. He takes Tipp and her to the palace to recover from years of imprisonment. He doesn’t pressure her with his feelings after everything she went through in the Zalindov prison. She admires how wonderful he is with his subjects and what a truly wonderful King he will one day become.
Her head tells her that as a Corentine Royal she should work with her rebel siblings to regain the throne for her bloodline. She tries to pass on only trivial things that she doesn’t think will truly help the rebels. Her constant betrayal is hurting her though and she must make a decision. As she interacts with others the truth of her bloodline leads to some dark truths she must face. It may not be so wrong that her bloodline was ousted from the throne.
Only what she told her siblings was not so trivial and her sister wasn’t as trustworthy as she thought. Everything unravels pretty spectacularly as Jaren is grievously wounded and knows of her betrayal. Kiva learns the truth of many terrible plots but can do nothing as she is carted back to Zalindov prison.

Final verdict: Kiva had a lot to work through between her loyalty to family and her loyalty to Jaren. She chose right where she could, but the choices she made had big consequences. I can’t wait to see in the third book how it all unfolds. She has some chance of help from Prince Caldon who at least knows her side of the story a little bit before everything went wrong. With nothing left to lose, it will surely be exciting to see what happens next.

You are here: Featured Review: The Gilded Cage (Lynette Noni)