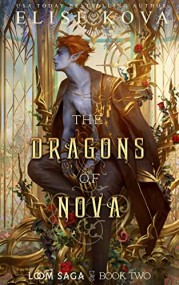 The only thing that could compare to the Dragons’ beauty is their brutality.

Cvareh returns home to his sky world of Nova with the genius crafter Arianna as his temperamental guest. The mercurial inventor possesses all the Xin family needs to turn the tides of a centuries-old power struggle, but the secrets she harbors must be earned with trust – hard to come by for Ari, especially when it comes to Dragons.

Up on the sky islands of Nova, Ari finds herself closer to exacting vengeance against the traitor who killed everything and everyone she once loved. But before Ari can complete her campaign of revenge, a secret from her past is exposed. One that will change the world.

While Nova is embroiled in blood sport and political games, the Fenthri on Loom prepare for an all-out assault on their Dragon oppressors.

Florence unexpectedly finds herself at the forefront of the new rebellion, as her unique blend of skills, and quick-shooting accuracy, make her a force to be reckoned with. For the future of her world, she vows vengeance against the Dragons.

But freedom comes with a steep cost. Before the rebellion can rise, the Guilds of Loom must fall.

The second book in the Loom Saga expands on its divided world, exploring the brutal and bloodthirsty sky islands of Nova. The Loom Saga is perfect for readers of gaslamp fantasy looking for deep worldbuilding and something truly unique.

THE DRAGONS OF NOVA is a fascinating sequel in a dark fantasy series. Expanding the world-building, this story is told in two parts. The first is that of Arianna, a chimera, and Cvareh, a dragon, who have traveled to Nova, the world of Dragons above Loom, filled with Fenthri. Cvareh has brought Ari with him to attempt to sway her to working with his sister, the head of House Xin, who seeks to overthrow the dragon king.

On Loom, Florence is mired in the Fenthri politics as she lives with the rebellion but is seen as an outsider, despite being a connection of Arianna whose talents they desperately need. When given an opportunity to help prove herself and gain resources she needs for her experiments, she takes it, though it becomes more dangerous than she ever could have anticipated – and Florence is soon to become a central character in what is brewing.

What I loved: This is a really riveting and engaging second book in a dark and thrilling series. This book deals more deeply with revenge and betrayal. On Nova, Dragons are increasing their strategies against each other, resulting in much blood and death. Arianna herself seeks revenge on the dragon who betrayed her and the people she cared about years before. However, now that her revenge is within grasp, Ari is thinking critically about her next moves and what she really wants. She is beginning to redefine herself and look at a bigger picture outside of her grief and pain, and where she lands will have implications for both Loom and Nova.

The story builds the world of Nova more and brings the Dragons into the forefront, expanding on the first book. New characters emerge amidst them, particularly those in House Xin. Through discussions with the Dragons/Cvareh and Arianna, there are some interesting theoretical questions about family loyalty, the power of the family unit, and seeking knowledge as they differ between the philosophical outlooks of the Fenthri and Dragons. While Dragons have a firm stance to appreciate family and have a very insular view of loyalty with the way they treat even outsiders who want to be a part of their family, they also have a quick reaction to any slight or betrayal. This juxtaposition was intriguing and leads to many bloody scenes.

Despite the way it is viewed as more primitive, Loom is organized by ability – something that worked better when there was choice, a mark of their society lost due to the dragons imposing their values upon the Fenthri. There are a few sides to this, which become clearer in this book as Florence begins to speak more with others in Loom. The view that seemed so clear in the first book becomes a bit more muddled, particularly when speaking of resources. Some characters are beginning to realize that a more complicated solution will be required to address the issues of the past and present – something that seems more challenging when considering the way that people in power react to these ideas differently.

Themes around what composes a family, love and loyalty, the causes and consequences of betrayal, politics, the power of insidious vs obvious attacks, and the individual/group power to make a difference are thought-provoking and evolve in this sequel in new and intriguing ways. This is definitely a series to follow, and I am very curious to see where the final book will go – there are no simple answers here.

Final verdict: A thrilling dark fantasy, THE DRAGONS OF LOOM is a riveting sequel that will leave readers gasping for more. Highly recommend this series for readers who like intricate world-building, conflicted anti-heroes, and clever inventions blended with magic.

You are here: Featured Review: The Dragons of Nova (Elise Kova)