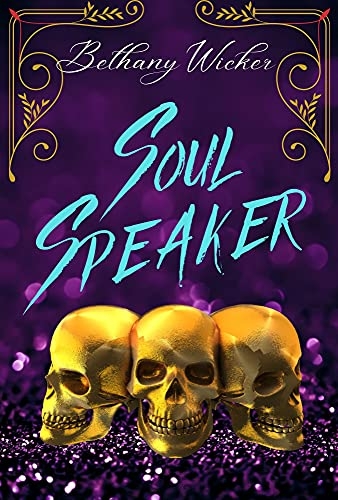 A princess of death, a powerless prince, and a war neither of them want.

Once a century, a Soul Speaker is born. They are said to be the harbingers of either peace or destruction. When Elara develops a talent for talking to the dead, nobody can question what she is. From birth, a target is placed on her back. Fearing for her safety, her father keeps her locked in the castle, but Elara can’t sit still forever.

When the enemy captures her brother, Elara won’t put his fate in the hand of others, but he’s been taken by the Lightning Prince—Harland. Rumors say he’s the deadliest opponent on the battlefield, but how can he be stronger than the Soul Speaker? Elara is the only one who can save her brother and bring peace to the warring countries. But something sinister hides behind the walls of Elkania and Harland may be the only one who can help her.

What I loved:
A princess of death, an egotistical prince, and a war that they are struggling to end is the landscape that this story expands on. Soul speakers are either peacemakers or destroyers of the world; Elara wants to be a peacemaker but knows nothing of the world as she has been kept as a prisoner by her father. When she sneaks out on her own, she soon discovers what a soul speaker is all about, and the price may be higher than she ever dreamed. Elara is easy to identify with as she battles anxiety, panic attacks, and struggles with her power. I liked that she did not know how to save the world right away and happen over more than one book.

What Left Me Wanting More:
Elara spends most of this book with the lightning prince and, on most levels, becomes a prisoner again, but this time she is in the company of souls. With a war raging between two kingdoms, I expected a lot more battle scenes to play out. The emotional turmoil was on point and gripping throughout the book.

The Final Verdict:
Soul Speaker is a well-thought-out story with characters that face heavy emotional turmoil as they battle it out for peace between the kingdoms. Worth a read, and I am excited to see how Elara and her deathmate bring peace to the land.