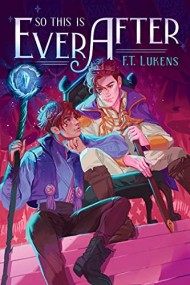 Carry On meets Arthurian legend in this funny, subversive young adult fantasy about what happens after the chosen one wins the kingdom and has to get married to keep it…and to stay alive.
Arek hadn’t thought much about what would happen after he completed the prophecy that said he was destined to save the Kingdom of Ere from its evil ruler. So now that he’s finally managed to (somewhat clumsily) behead the evil king (turns out magical swords yanked from bogs don’t come pre-sharpened), he and his rag-tag group of quest companions are at a bit of a loss for what to do next.

As a temporary safeguard, Arek’s best friend and mage, Matt, convinces him to assume the throne until the true heir can be rescued from her tower. Except that she’s dead. Now Arek is stuck as king, a role that comes with a magical catch: choose a spouse by your eighteenth birthday, or wither away into nothing.

With his eighteenth birthday only three months away, and only Matt in on the secret, Arek embarks on a desperate bid to find a spouse to save his life—starting with his quest companions. But his attempts at wooing his friends go painfully and hilariously wrong…until he discovers that love might have been in front of him all along.

SO THIS IS EVER AFTER is a delightful fantasy rom-com that takes place after the big battle. Arek and his assembled group of friends have fulfilled the prophecy set before them and defeated the evil king who usurped the throne at the very beginning of the book. What follows are the things that come after. Not having a better solution, Arek declares himself king while they search for the rightful heir to the throne. However, that soon turns into a conundrum as the throne is sealed with magic, and there is no rightful heir.

To make matters more complicated, he must marry by his eighteenth birthday – in three months, and the only person he has a crush on seems to view him as only a friend. As Arek begins to run the kingdom and work on his love life, things begin to take a turn into metaphorical uncharted territories.

What I loved: This was such an entertaining and delightful read with plenty of smiles to be found. Arek and his friends were really endearing, with ultimate successes as the peasants have taken over the kingdom and set out to do things better. This book imagines the what comes after the big quest – what happens with the evil king gone? It was clever and highly enjoyable. The magic and the need for a marriage (bonding ceremony) adds to the intrigue, time pressure, and creates some unique conditions for a romance. This is a friends-turned-more trope that is done beautifully.

There are some intriguing themes around politics, kindness, and romance, and the focus on friendships, the aftermath of something so big, and comedy made this a really fun book that was easy to devour. The LGBTQ+ rep is also great throughout the story, and I appreciated the past and present romances that form. The mix of comedy amongst what could have been an angsty read (considering all the trials that led them to the present and those they face now) made this a light-hearted and giggle-worthy read – just a really fun book.

Final verdict: With a delightful mix of comedy, romance, and magic, SO THIS IS EVER AFTER is a charming and entertaining YA fantasy rom-com that is highly devourable. I definitely recommend checking out this fantastic and unique read!

You are here: Featured Review: So This Is Ever After (F. T. Lukens)