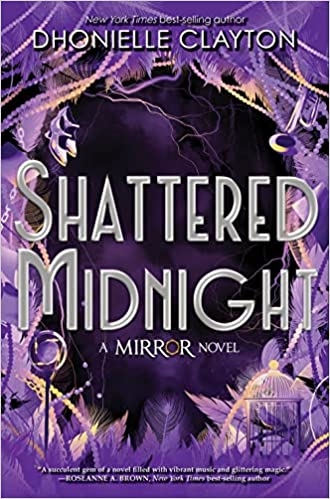 The Mirror: Shattered Midnight is the second novel in the innovative four-book fairy-tale quartet written by Julie C. Dao, Dhonielle Clayton, J.C. Cervantes, and L. L. McKinney, following one family over several generations, and the curse that plagues it.

Zora Broussard has arrived in New Orleans with not much more than a bag of clothes, a beautiful voice, and a pair of enchanted red shoes. Running from a tragic accident caused by her magic, Zora wants nothing more than to blend in, as well as to avoid her overbearing aunt and mean-spirited cousins. Music becomes Zora’s only means of escape, yet she wonders if she should give it all up to remove the powers that make her a target, especially as a Black woman in the South.

But when Zora gets the chance to perform in a prominent jazz club, she meets a sweet white pianist named Phillip with magic of his own, including a strange mirror that foretells their future together. Falling into a forbidden love, Zora and Phillip must keep their relationship a secret. And soon the two discover the complicated connection between their respective families, a connection that could lead to catastrophe for them both. In the era of segregation and speakeasies, Zora must change her destiny and fight for the one she loves . . . or risk losing everything.

SHATTERED MIDNIGHT is a sweeping YA historical fantasy, the second installment of a unique series around a magical object where each book follows a different person and is written by a different author. This book takes the reader to 1920s New Orleans, where Zora is on the run for her magical mistake in NYC. She is living with her aunt and cousins under a false name, trying to suppress her magic and lay low. Her mother is doing damage control in New York, using magic to hide Zora.

Zora loves jazz – and her magic revolves around music, making for a powerful combination. While she lives under her aunt’s tough thumb during the day, at night she sneaks to a club where she sings as the Sweet Willow. Trying to understand herself and her magic, she sees the world as it is, segregated and punitive for the color of her skin – Zora is Black. When she falls in love with a white boy, Phillip, it is a dangerous thing and the world will not allow them to forget it. Zora is determined to be true to herself and her heart, if only she can find a path to her destiny.

What I loved: This was a sweeping read that carries the reader back in time to life in the 1920s for someone who is Black, with speakeasies, segregation, danger from police and white people, as well as all the related daily challenges these many obstacles bring. Even going into a shop or buying food presents challenges for her aunt’s relatively wealthy Black family. The historical setting was brought to life through the writing, and these were powerful themes. Other themes around family legacy, power/powerlessness, hatred, music, religion, and expectations for women were also really thought-provoking.

The plotline of the mirror is really intriguing, and the object has a larger role in the later parts of the story. The use of magic and its role as a source of self-protection made it feel like magical realism – it was easy to believe it could exist. Zora was an intriguing character who is trying to define her life for herself and carve out her own destiny – something that seems impossible when the world and your family feels that they know where you should be. The romance was really sweet and built nicely into the overall plot.

What left me wanting more: As a very small thing, the ending was a bit open, and as someone who likes all the answers, I would have liked to step even further into the future to see where things ended up, but maybe we’ll learn about it in the next book. The beginning of the book was very slow-building, but it did really pick up about a third of the way through.

Final verdict: Overall, SHATTERED MIDNIGHT is a thought-provoking YA historical fantasy that I would highly recommend for fans of THE BELLES, LEGENDBORN, and SO MANY BEGINNINGS.