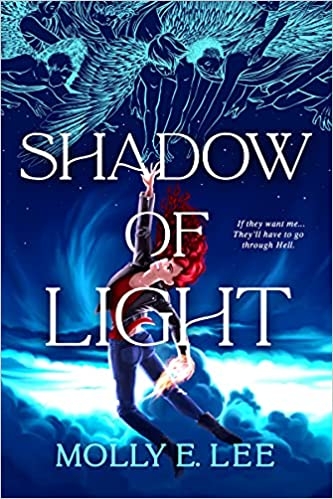 SHADOW OF LIGHT is a fast-paced fantasy adventure as Harley journeys to the underworld to save her sister. As we learned in the first book, Harley will do anything it takes to protect her younger sister, Ray, even when it means taking a dangerous journey to the underworld to sever a demonic link. Accompanied by Draven, who remains irresistible and broken, and Cassiel, Harley will face many dangers and learn something about the Ather as she travels through its various realms.

What I loved: The themes begun in the first book are carried through to this one in interesting ways, such as around family and family bonds, abuse and its consequences, self-worth and value, romantic entanglements, sibling connections, torture and its mental toll, corruption of power, the way history is twisted by the tellers, and fate. The connection between Harley and Ray is really a driving force for her, and Draven is similarly driven by his love for his brother. I do wish we had more insight into Draven’s mind, as we see things colored by Harley’s vantage point, but his motives seem to be centered around Harley and his brother, a mirror of Harley’s own.

This is a really fast-paced adventure read, and I found that it felt quite quick, as Harley and friends (plus an awesome new friend) travel through the realms. The book moves quickly from one to the next as Harley is on a mission and unable to linger, but it was still really intriguing to learn about these realms and their eccentricities.

As a heads up, this one picks up fast and does not spend time recapping the first book. I would recommend reading the last few chapters of the first book and/or reading a good synopsis online if it’s been a while since you read the first. Also of note, similar to the first book, this one ends with a cliffhanger. Until I got to the very end, it started to look like this might be the conclusion to the series, but then a twist at the end tells what is coming next and leaves the reader with some hefty questions! Also, the romance takes a few steps up, walking the new adult line here, and that, combined with the themes around abuse/torture, may make this better for older YA readers.

Final verdict: A fast-paced fantasy adventure, SHADOW OF LIGHT continues Harley’s story with a perilous journey through the Ather, expanding upon the intriguing world-building, compelling characters and romance, and the thought-provoking themes of the first book. Recommend for fans of Jennifer L. Armentrout, Tracy Wolff, and Victoria Aveyard.