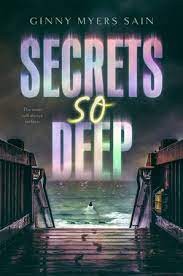 From the bestselling author of Dark and Shallow Lies comes a moody and atmospheric paranormal thriller about a seventeen-year-old girl returning to an exclusive theater camp to uncover the truth of what really happened there twelve years ago, the night her mother drowned.
Twelve years ago, Avril’s mother drowned at Whisper Cove theater, just off the rocky Connecticut coastline. It was ruled an accident, but Avril’s never been totally convinced. Local legend claims that the women in the waves—ghosts from old whaling stories—called her mother into the ocean with their whispering. Because, as they say at Whisper Cove, what the sea wants, the sea will have.

While Avril doesn’t believe in ghosts, she knows there are lots of different ways for places, and people, to be haunted. She’s spent the past twelve years trying to make sense of the strange bits and pieces she does remember from the night she lost her mother. Stars falling into the sea. A blinding light. A tight grip on her wrist. The odd sensation of flying. Now, at seventeen, she’s returning to Whisper Cove for the first time, and she might finally unravel the mystery of what really happened.

As Avril becomes more involved with camp director Willa and her mysterious son Cole, Whisper Cove reveals itself to her. Distances seem to shift in the strange fog. Echoes of long-past moments bounce off the marsh. And Avril keeps meeting herself—and her dead mother—late at night, at the edge of the ocean.

The truth Avril seeks is ready to be discovered. But it will come at a terrible cost.

Secrets So Deep is a hauntingly beautiful read, with what I would call minor faults.

The premise of the book is.. captivating. As a young child, Avril’s mother drowns in what was ruled an accident – and she, herself nearly drowned. With no memories of anything before the drowning, several empty holes in her heart, and phantoms from the past lurking behind her, Avril heads to a summer camp for a theatrical production hosted by her mother’s bestfriend, in a ghost town.

The most prevalent themes are finding oneself and processing grief.

I loved that every chapter heading was written like a script; Act I, Scene III. I felt like it helped draw me into the story. Ginny Myer Sain did a fantastic job setting the scene and building suspense – I try to always write myself notes while reading, and my notes are all over the place with Secrets So Deep. The different layers she had built had me continuously trying to guess the outcome. The waking nightmares, visions, strange sounds, and disorienting fog blended together to create this precipice between what is real and what is not.

I did find that in the beginning I wasn’t as drawn to the story as I had hoped. I was a bit confused as nothing I was reading seemed to fit in with the blurb. The pace was a bit slower than I would have liked as well, but by the second or third chapter I was pretty immersed in the story, staying up way too late because I could not put it down until I had answers!

A majority of the characters were complex – which is needed in a novel such as this. Others I felt were un-needed and unbelievable – in my opinion, as their relationships with the main characters were shallow at best and a good portion of their interactions were brushed to the side by Avril.

I also would have enjoyed a more fulfilling epilogue. I felt kind of cheated after that big plot twist and ending. Although, at the same time.. it erases everything that I thought happened. Another twist, perhaps?

There are definitely some things in this book that could triggering for others.
– Mention of suicide
– Mention of/implied sexual assault
– Murder
– Cultist views
– Underage drinking/smoking

All in all, this was a fantastic YA thriller, full of suspense and just the right amount of romance.
The haunting summer camp on the water is a perfect setting for ghost stories.