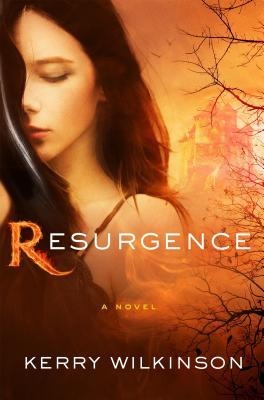 “Can I ask you one thing…why does it have to be you?” My throat is dry but I manage to say the words clearly enough: “If I don’t do it, who else will?” An entire country has been lied to. Silver Blackthorn was supposed to be one of the privileged few, chosen to serve and help rebuild a shattered nation. Instead, she is a rebel. Tales of her defiance have spread across the land. King Victor and the Minister Prime want her dead, the resistance groups are desperate for her help. But Silver’s friends and family are in dire jeopardy; hiding is no longer an option. As her travels take her into the far reaches of an unknown land, she is forced to make new friends and hunt for new allegiances. Final battle lines are being drawn. The time has come. Then there’s the hardest choice of all: Opie or Imrin.

The adventure and rebellion of Silver Blackthorn ends here. The third and last book in the trilogy, RESURGENCE starts off with the rebellion still working to overthrow King Victor and the Minister Prime. (Off-topic note: It took me two times to write “Minister Prime” instead of “Prime Minister.”) Let’s dig into this book.

Silver Blackthorn is perhaps one of my favorite characters in this book. She’s not THE favorite character, but she is high up in the list. Intelligent, smart, and daring, she is the kind of leader the rebellion needs. She’s not only the kind of person who reacts but also one who makes the action. She takes the initiative. Have I mentioned smart? Despite the large amount of resources her enemies have, she still can one-up them by skillfully wrangling her way out. Give this girl a round of applause.

Imrin, to be honest, is my favorite character of the story. A survivor, he has managed to go through things that make me shudder. It’s his moments and his very name I particularly look out for, and though his biggest part is in the Opie/Silver/Imrin love triangle, I like to read the parts where Imrin is just Imrin. Speaking of the romance, I have to admit that I’m a bit lost because of it. The twists in the relationship comes at me with aggression, and I’m really afraid for my vision. Have I missed all the signs or something? (Then again, I’m far more interested in the conflict, the rebellion to be specific, than the actual romance.)

The villain has his flaws yet remains compelling throughout this book. Yes, he is loathed by me and almost every character in the story, but he is clever like how Silver is clever. (Though, he does have some help from his advisor, Minister Prime.) He is the kind of villain that is despicable, selfish, and vain. Have I mentioned selfish? And I just love to hate him. Such a glee to despise him and imagine bludgeoning him in the head.

The plot moves quickly, and I’m swept into the story without any hesitation. It’s an adventure, and it suddenly ends abruptly. But the ending is not exactly the best part of the book. It definitely has its highs and lows, and I know that I’m feeling like I’m missing something in the story (especially when it comes to the love triangle), but it’s nice to see the story end on a rather high note. (I thought it was going to end on something else.)

Overall, RESURGENCE is the fast-paced conclusion to the trilogy of Silver Blackthorn. It involves an insurgency and a cruel regime. It’s a battle and a struggle, but it’s an amazing and worthy one to watch. I dare you to read about Silver Blackthorn.