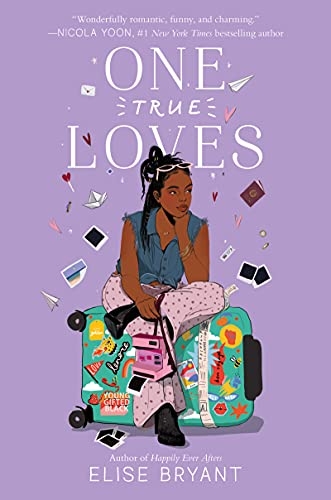 From the author of Happily Ever Afters comes another irresistible YA romantic comedy full of self-discovery and Black love—and a dreamy European cruise. Perfect for fans of Nicola Yoon, Jenny Han, and Stephanie Perkins, with crossover appeal for readers of Jasmine Guillory and Talia Hibbert romances.

Lenore Bennett has always been a force. A star artist and style icon at her high school, she’s a master in the subtle art of not giving a . . . well, you know what. But now that graduation is here, she’s a little less sure.

She’s heading to NYU in the fall with a scarlet U (for “undeclared”) written across her chest. Her parents always remind her that Black kids don’t have the luxury of figuring it out as they go—they have to be 110 percent prepared. But it’s a lot of pressure to be her ancestors’ wildest dreams when Lenore’s not even sure what her dreams are yet.

When her family embarks on a post-graduation Mediterranean cruise, her friend Tessa is sure Lenore’s in for a whirlwind romance. But Lenore knows that doesn’t happen to girls like her.

Then she meets Alex Lee. After their parents bond over the Cupid Shuffle, she ends up stuck with him for the remainder of the cruise. He’s a hopeless romantic and a golden boy with a ten-year plan. In short, he’s irritating as hell.

But as they get to know each other during the picturesque stops across Europe, Alex may be able to help Lenore find something else she’s been looking for, even if she doesn’t want to admit it to herself: love.

‘One True Loves’ by Elise Bryant weaves together a multitude of themes that become one beautiful story. While Lenore is graduating from high school, she doesn’t quite know what she wants to do with her life. She’s been accepted to college and is planning to travel to New York City to start her life after high school, but there are loose ends to tie up and she isn’t quite sure how to tie them.

First, she has to deal with the heartbreak that comes from always feeling second best with any guy she’s ever interested in romantically. Her best friends try to make her feel better, but there isn’t much anyone can do since Lenore’s is not really willing to be fully open with her friends about how she feels. She puts on a brave front, but deep down it hurts. Just like it hurts that her parents are always looking at her like she has to be the next big thing, and she doesn’t quite know what to make of that. She looks up to her brother, Wally, who seems to be all put together, but looks aren’t always indicative of what’s really going on, and Lenore comes to find that out as they travel together on a cruise vacation for two weeks after high school ends.

While on the cruise, she sees a good-looking guy across from her at the Trevi Fountain, the same place where her friend back home told her that she could wish to find love. She thinks maybe there’s something to it until she happens upon him in person, and she realizes that the guy, Alex, aggravates her to no end. From the way they meet to his outlook on life where everything is planned at least ten years in advance, she doesn’t want anything to do with him. However, as their families spend more time together, Lenore and Alex find that they have more in common than they think, including the ability to talk to each other about topics that seem off-limits with others.

You are here: Featured Review: One True Loves (Elise Bryant)