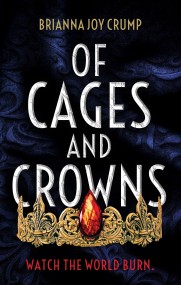 For goddess-touched girls, there is only one destiny: the Culling

From the moment Monroe Benson is born with a mark on her hand and the ability to summon fire from her fingertips, her life will never be her own. She’s goddess-touched, which means she’s destined to participate in the Culling, an age-old competition to determine the next queen of Erydia. For most of her seventeen years, her family has managed to keep Monroe―and her powers―hidden. But now, as Queen Viera calls for the Culling to start, and war looms on the horizon, Monroe can no longer hide. She must face her destiny whether she wants to or not.
For the ten goddess-touched girls, all with different powers, the inevitably of this fight to the death has always ruled their lives. The tradition is both barbaric and cruel, but to make matters worse―Monroe isn’t prepared. She hasn’t trained her whole life for this day. She doesn’t want to be in the spotlight. She doesn’t want the crown.

While Monroe struggles with her fate, a rebellion is brewing in the castle and in the country. A group called the Culled are banding together; their goal―to topple the monarchy. And the more they rise, the more merciless Viera is with her kingdom, recruiting younger and younger people from poorer and poorer places to fight in a war no one wants to be waging.

When Monroe finds herself on the front lines of the rebellion’s inner circle, only one thing stands in her way: Cohen. The queen’s son and the man who will be king. The pair grows close, yet Cohen’s dedication to duty, to family, to tradition stands in stark contrast to the boy Monroe sees at night in the kitchens, secretly making the two of them a snack.

As the fight crescendos around them, and the death of innocents becomes a reality, the choices Monroe makes will reverberate through the kingdom . . . and her heart forever.

What Worked: This book had Hunger Games vibes while creating a new world. This was a unique take on the ‘chosen one’ theme. Monroe Benson was born goddess-touched, marking her as one of ten girls that will compete to the death for the hand of Prince Cohen when he is old enough to marry. However, instead of embracing her destiny, her family listed her as a boy on her birth certificate and then moved to the farthest, poorest section of the country to raise her.
She does not go quietly to the culling and once forcibly found and taken to the Palace, she uses her new friendship with the prince to try to get him to change the culling so she doesn’t have to become a killer or a victim. There are many books where the character nobly accepts her fate. It was refreshing and realistic that she never stopped speaking out against the system even as she is forced to train and prepare.
There were a couple of convenient plot aids that I thought for the longest time were plot holes. Such as the way the Priestess knew where to look for her, in the beginning, to get her to the culling and the easy relationship the prince has with her and only her out of the ten girls. I was pleasantly surprised when they are addressed later in the book and do make sense that it happened the way it did and that Monroe and us the audience would only find out about it later.
Final Verdict: This was a book that gained momentum as the stakes get direr and the relationship deeper. The copy I have does not mention a sequel, but with the way it ended, I think there will have to be. At first, this was a casual read for me. Then everything built into a nonstop series of events that made me keep turning the pages fully engaged to the end. I believe readers will be surprised at the plot twists and enjoy the story as it unfolds.

You are here: Featured Review: Of Cages and Crowns (Brianna Joy Crump)