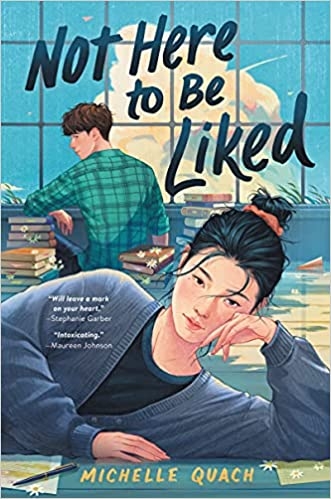 Emergency Contact meets Moxie in this cheeky and searing novel that unpacks just how complicated new love can get…when you fall for your enemy.

Eliza Quan is the perfect candidate for editor in chief of her school paper. That is, until ex-jock Len DiMartile decides on a whim to run against her. Suddenly her vast qualifications mean squat because inexperienced Len—who is tall, handsome, and male—just seems more like a leader.

When Eliza’s frustration spills out in a viral essay, she finds herself inspiring a feminist movement she never meant to start, caught between those who believe she’s a gender equality champion and others who think she’s simply crying misogyny.

Amid this growing tension, the school asks Eliza and Len to work side by side to demonstrate civility. But as they get to know one another, Eliza feels increasingly trapped by a horrifying realization—she just might be falling for the face of the patriarchy himself.

Eliza doesn’t have a lot of patience with the superficiality of high school. She’s determined to use her career on the school newspaper to get elected editor her senior year, and doesn’t want to dilute her energies by worrying about what she’s wearing or about boys. Her Chinese Vietnamese mother doesn’t feel the same way; she doesn’t understand why Eliza can’t make more of an effort and wear something that an oversized, gray cardigan. When Eliza loses the editorial position to ex-jock Len, her mother thinks she is right. Eliza has other thoughts– the school is notoriously biased against females in positions of power and authority, and she writes an editorial about this. Unfortunately, someone posts this on the school paper’s web site. There’s less fall out than you might suspect, although Eliza does have to meet with the principal, who just wants her and Len to work things out between themselves. Len, who had to quit baseball because of an injury, feels that he won the election on his own merits, although he concedes that Eliza certainly has more writing experience that he does. The two are assigned an interview with a new boba tea shop’s owners, and are also working on a school project together. Despite herself, Eliza finds herself enjoying Len’s company. When Eliza and her friends plan a school wide protest over the the inequity of representation in school groups, will this get her any closer to the editorial position… and any further away from Len?
Good Points
This was an interesting look at a range of high school group dynamics, with a range of cultural backgrounds. This is set in Southern California, and Eliza tells us that the most popular kids are the ones of Korean descent, since they make up the majority of the student body. Eliza’s parents are of Chinese descent, but come from Vietnam. Len has a Japanese mother and a white father. In addition to the newspaper, we also get a glimpse into the inner workings of student government, and see the drive to succeed that many of the students in the school have.

Eliza is a very practical young woman, and doesn’t have any interest in “being pretty” like her sister Kim. It interferes with her work on the newspaper, and since she is motivated to make the Wall of Editors so she will go down in posterity, she’s rather spend her time on her investigative journalism. It’s great to see this kind of passion in a high school student, even if I have to tell her that in 20 years, no one will even notice her picture in the Wall of Editors. (Says someone who was once very proud of being included on the Senior Service Award plaque in high school orchestra. I’m sure that after 40 years, the plaque is long gone!)

Even though Len is a bit annoying, and Eliza has more pressing matters to concern her, there is some romance. This makes sense. It’s high school. She and Len have a lot in common, and do get along in a lot of ways. I appreciated that it wasn’t one of these love/hate relationships that are so common in teen literature. Sure, she’s annoyed by him, but he’s cute and interesting. And interested in her. This is a pretty solid basis for a high school relationship.

There are lots of middle grade books about school newspapers, which seems odd to me, but it makes perfect sense to center a book around the much more prevalent high school newspaper scene. Hand this to readers who enjoyed Smith’s Hearts Unbroken, Lehrman’s The Last Best Story, or Doktorski’s Famous Last Words. This also put me a little in mind of Goo’s The Way You Make Me Feel, but with the newspaper instead of a food truck, mainly because I think Clara and Eliza would get along well.

You are here: Featured Review: Not Here To Be Liked (Michelle Quach)