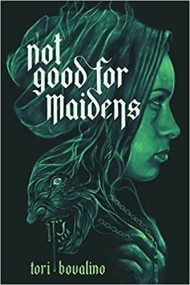 They’ll lure you in with fruit and gems and liquor and dancing, merriment to remember for the rest of your life. But that’s an illusion. The market is death itself.

Beneath the streets of York, the goblin market calls to the Wickett women―the family of witches that tends to its victims. For generations, they have defended the old cobblestone streets with their magic. Knowing the dangers, they never entered the market―until May Wickett fell for a goblin girl, accepted her invitation, and became inextricably tied to the world her family tried to protect her from. The market learned her name, and even when she and her sister left York for Boston to escape it, the goblins remembered.

Seventeen years later, Lou, May’s niece, knows nothing of her magical lineage or the twisted streets, sweet fruits, and incredible jewels of the goblin market. But just like her aunt, the market calls to her, an echo of a curse that won’t release its hold on her family. And when her youngest aunt, Neela, is kidnapped by goblins, Lou discovers just how real and dangerous the market is.

To save her, both May and Lou will have to confront their family’s past and what happened all those years ago. But everything―from the food and wares, to the goblins themselves―is a haunting temptation for any human who manages to find their way in. And if Lou isn’t careful, she could end up losing herself to the market, too.

NOT GOOD FOR MAIDENS is an enthralling and dark YA fantasy about the Goblin Market, a market that ensnares young people as fodder for goblin appetites. The book takes place in 2 timelines, one that occurred 18 years before from the perspective of May who barely survived the market, and the other in the present from the perspective of May’s niece Lou, who has grown up away from the market but whose life is on a collision course for it.

As we travel between May’s time and the present, we learn about the seductive nature of the market and the reasons why humans dare to venture into it, as well as what a build to what happened to May and the way it is tied to the present. Lou’s aunt and May’s much younger sister, Neela, with whom Lou has grown up with like a sister, has been taken by the market, and time is ticking on her freedom.

What I loved: This was a very atmospheric read that brings to life the danger and temptation of the market as it called to May in the past and the power it still holds over those in York now. Even though they know not to venture into the market, humans travel there anyway – of their own free will until it is far too late for them. The dark realities of the market are captured through the text and it comes to life in all its gore and frission.

While both the characters were compelling, I found May’s story to be particularly fascinating, and it was captivating to see her history and encounters with the market, all the steps and missteps that led to her capture. She was just a teenager at the time, and her voice and decisions shone her age. The LGBT romance element was really intriguing with some star-crossed romance flair. Lou in the present was more focused on the rescue and other elements. I did not feel as if we got to know her as well, but her story was also captivating.

Themes around entrapment, the escalation of a poor decision, the power of the dark, and dangerous choices will resonate with teenagers, many of whom have probably done something they knew they shouldn’t, perhaps not with such potentially dire consequences but dancing with danger all the same. The goblin market feels like it could be a metaphor for such tempting and perilous choices. Other themes around romance, betrayal, family, belonging, trust, and strength make this a really intriguing read.

Final verdict: An atmospheric and dark YA fantasy, NOT GOOD FOR MAIDENS is a captivating and shocking read that pulls the reader into the deadly and devastating world of the Goblin Market. Recommend for fans of THE BONE HOUSES, TEETH IN THE MIST, and GALLANT.

You are here: Featured Review: Not Good for Maidens (Tori Bovalino)