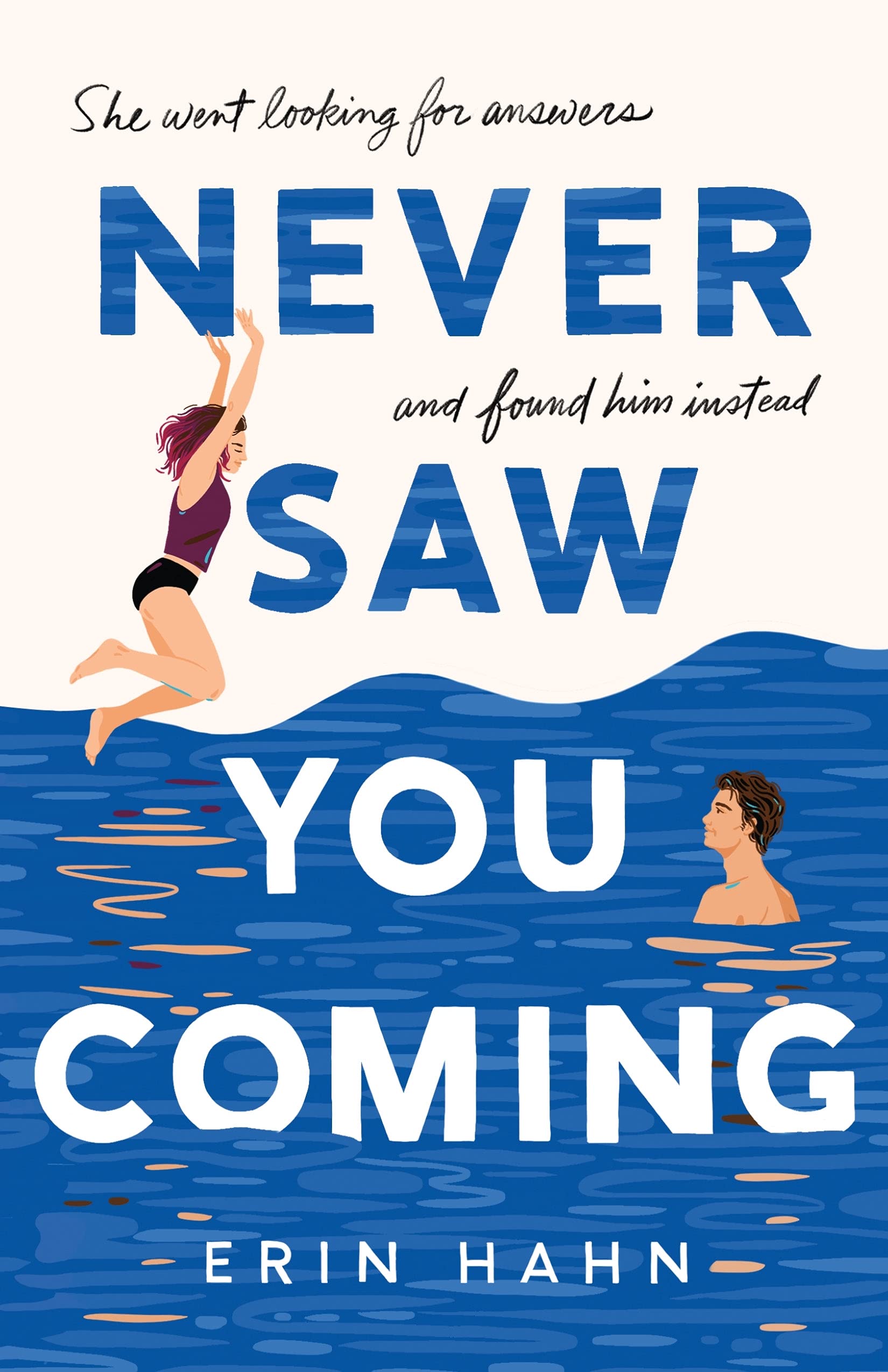 In Erin Hahn’s Never Saw You Coming, sometimes it takes a leap of faith to find yourself. Eighteen-year-old Meg Hennessey just found out her entire childhood was a lie. So instead of taking a gap year before college to find herself, she ends up traveling north to meet what’s left of the family she never knew existed – all while questioning the ideals she grew up with. While there, she meets Micah Allen, a former pastor’s kid whose dad ended up in prison, leaving Micah with his own complicated relationship with faith. The clock is ticking on his probation hearing and Micah, now 19, feels the pressure to forgive – even when he can’t possibly forget. As Meg and Micah grow closer, they are confronted with the heavy flutterings of first love and all the complications it brings. Together, they must navigate the sometimes-painful process of cutting ties with childhood beliefs as they build toward something truer and straight from the heart.

Strong YA Contemporary about Religion, Faith, and Falling in love
NEVER SAW YOU COMING is an intriguing YA contemporary romance about religion, love, and finding yourself. Meg has learned a seemingly impossible truth about herself and her parents that has sent her reeling. The man she always thought was her father was not – her biological father died before he even knew her mother was pregnant. Now, she is taking some time to head to her biological father’s hometown and meet the family she never knew she had.

Not long after arrival, she meets Micah, a very cute boy who she has a clash with but who later asks for a favor to be his fake date, which leads to a real date. Micah is troubled by the past that seems to be following him – when he was 13, it was revealed that his father, a pastor, was involved in some heavy and terrible crimes, landing him in prison. The probation hearing is coming up, and so are all the feelings Micah has about it.

As Meg and Micah get to know each other, they are also grappling with church, their faith in the face of the church, and how they want to define their own lives.

There is a lot about this book that is really powerful for children who grew up in the church. As a PK, there was a lot that felt uncomfortably familiar about the story, and I appreciated the book as a lens to further examine it all. For teens who may not have yet confronted some of these similar realities, it may be startling (I can imagine being quite startled by some of these ideas when I was a teen) but also rewarding. The book includes as key themes the hypocrisy of churches and the leaders within it as well as how the standards around modesty and purity are imposed on girls (and that it is their job to protect the purity of the boys around them too). Importantly, it separates out God from the church – something that can seem really hard to do.

The beauty of the romance is sometimes overshadowed by the things they have been taught, where Meg’s clothing choices she fears are leading others astray and chaste kisses are construed as something sinful. These feelings can be so real, especially when taught things about oreos (I think many will have heard a similar story, such as unwrapping a gift) and that the onus is on the girl to prevent others’ impure thoughts and the like. This discussion is really important and hits pretty close to home for children raised in the church. Although the book does not discuss cases of abuse and the metoo movement, this would also have some bearing on these discussions, as they are a particularly dissonant problem with this messaging. I think, particularly in light of Micah’s father, that it could also have been helpful to discuss these issues, but I do understand the importance of also emphasizing problematic issues around consensual encounters and the notion of purity.

The book is told from the perspectives of both Micah and Meg, and I appreciated seeing the events unfold from both of their sides. They each have important themes and so much character growth during the story. I found them to both be compelling characters, and their relationship was really beautiful. I also appreciated what we saw of their families, who are imperfect but hold a lot of love in their hearts, making them ultimately something special.

Other themes around abuse of power, Christian judgment, problems of jumping to assumptions, depression, LGBTQ issues with regards to the church, and teen pregnancy made this a book that needs discussion. This would be great for a book club or even an online discussion group, as many of these themes will resonate with young readers and are handled in a thoughtful way.

Final verdict: A compelling and thought-provoking read, NEVER SAW YOU COMING is a strong YA contemporary book about church, faith, and falling in love that I recommend picking up and discussing.

You are here: Featured Review: Never Saw You Coming by, Erin Hahn