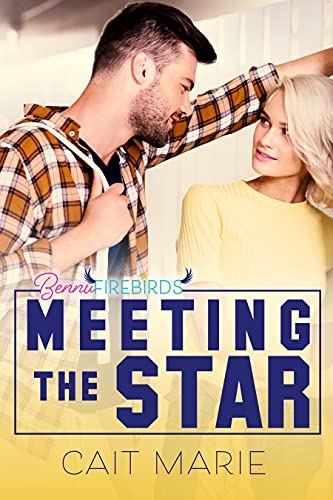 The spotless reputation? Check.
The gorgeous movie star? Check.
The only problem? She can’t seem to stop embarrassing herself around him.

Eliza isn’t an actress like her friends. She’d rather come up with the stories than appear in them. When she took up a couple summer jobs on campus, hoping to use the quiet time to write, she had no idea the next big romantic comedy would be filming there.

Or that it would star her life-long celebrity crush, Lucas Warner.

As she tags along with her best friend around set, she and Lucas inevitably grow closer. But even if he didn’t have a girlfriend, he wouldn’t want to drag the sweet, clumsy girl into his chaotic world.

No matter how much he wants to be the one to corrupt the innocence out of her.

When Eliza meets Lucas (a big time movie star), she struggles to find words, as most people would. Not only is he gorgeous, but she’s a huge fan of his. She thinks this is a once in a lifetime chance. However, with her best friend Maya working with him, of course Lucas is going to be around. As the star-struck Eliza discovers how to interact with him, she sees that there’s more to him than just a movie star.

As an actor, it’s hard to tell friends from those who are using you. Lucas constantly has this problem so he struggles with new people. When he meets Eliza, he realizes how different she is from other people he’s met. She’s genuine and kind. These traits draw him in and makes him want to get to know her. But they have so much going against them, the biggest one being that Lucas is only here temporarily. Is it really worth risking his heart for such a short-lived romance?

With her awkwardness, Eliza reminds me of myself so it’s nice being able to relate to her. I’m also that person who doesn’t know what to say in social situations. It’s a nice touch that Eliza’s writing a book and Lucas is the only one with the privilege of that knowledge. It’s something they bond over that’s only theirs. The ending is also perfection and Cait Marie brings us another set of characters readers can’t help but to love. I’m looking forward to MISSING THE BEAT!

Final Verdict: I would recommend this contemporary romance to readers who want characters they can relate to. Ones we can watch grow into better and stronger people with a love that’s unbreakable.

You are here: Featured Review: Meeting the Star (Cait Marie)