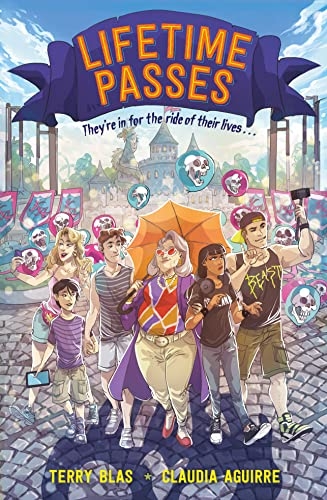 In this darkly comedic YA graphic novel, a group of teens starts a program to bring senior citizens to a local theme park to take advantage of the unofficial park policy: If someone dies on the property, the rest of their party is given lifetime passes!

Sixteen-year-old Jackie Chavez loves her local amusement park, Kingdom Adventure, maybe more than anything else in the world. The park is all she and her friends Nikki, Daniel, and Berke—although they aren’t always the greatest friends—talk about. Kingdom Adventure is where all Jackie’s best memories are, and it’s where she feels safe and happy. This carries even more weight now that Jackie’s parents have been deported and forced to go back to Mexico, leaving Jackie in the United States with her Tía Gina, who she works with at the Valley Care Living seniors’ home. When Gina tells Jackie that they can’t afford a season pass for next summer, Jackie is crushed. But on her next trip to Kingdom Adventure, she discovers a strictly protectedsecret: If a member of their party dies at the park, the rest of their group gets free lifetime passes.

Jackie and her friends hatch a plot to bring seniors from Valley Care Living to the park using a fake volunteer program, with the hopes that one of the residents will croak during their visit. The ruse quickly gets its first volunteer—a feisty resident named Phyllis.

What starts off as a macabre plan turns into a revelation for Jackie as Phyllis and the other seniors reveal their own complex histories and connections to Kingdom Adventure, as well as some tough-to-swallow truths about Jackie, her friends, and their future.

With artist Claudia Aguirre, Terry Blas has crafted a graphic novel that is dark and deeply moving. This book is Cocoon meets Heathers—a twisted satire about a magical land and the people who love it, even to the point of obsession. Jackie’s summer is about to turn into a wild ride filled with gallows humor, friendship, and fun—or is it?

Jackie Chavez’s best memories are of the trips her and her family took to the Kingdom Adventure amusement park. Since her parents were deported, it hasn’t been the same. She still enjoys going with her friends, but even that is threatened when her Tía Gina tells her they can’t afford the season pass anymore. When Jackie and her friends overhear a story of people getting lifetime passes after a member of their party died on the property, they hatch a plan. They will bring seniors from the Valley Care Living center to the park in hopes one might pass on while there. What they didn’t expect was Phyllis, a senior who has a deep connection to Kingdom Adventure and knows just what they’re up to. Phyllis and Jackie will discover they have more in common than expected, and true friendship means more than spending time with people just because they happen to be nearby.

I was a little hesitant about the premise of this graphic novel at first, but it completely won me over. While Jackie is desperate to keep visiting Kingdom Adventure, she doesn’t actually want anyone to get hurt. She is trapped in a place of high emotional pain, and the park is one of the few things that bring her any kind of real happiness. Most of her friends aren’t exactly real friends toward her, and outside of Gina, she feels alone. Once Phyllis and the other seniors come in to the picture, Jackie starts to see that true connections with people who see and love you for you are worth fighting for. I loved her growth and was nearly in tears at the end.

Claudia Aguirre’s artwork is simply gorgeous. Even in busy, chaotic scenes with many details (like the amusement park itself), Aguirre made each character stand out and gave masterful backdrops to every scene. The art and the dialogue are particularly paired well with Phyllis’s dry sass and serious expressions.

LIFETIME PASSES is an unforgettable story of friendship, finding connections in unexpected places, and learning to hold joy while still carrying pain.