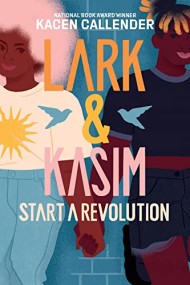 From National Book Award–winner Kacen Callender, a contemporary YA that follows Lark’s journey to speak the truth and discover how their own self-love can be a revolution

Lark Winters wants to be a writer, and for now that means posting on their social media accounts––anything to build their platform. When former best friend Kasim accidentally posts a thread on Lark’s Twitter declaring his love for a secret, unrequited crush, Lark’s tweets are suddenly the talk of the school—and beyond. To protect Kasim, Lark decides to take the fall, pretending they accidentally posted the thread in reference to another classmate. It seems like a great idea: Lark gets closer to their crush, Kasim keeps his privacy, and Lark’s social media stats explode. But living a lie takes a toll—as does the judgment of thousands of Internet strangers. Lark tries their best to be perfect at all costs, but nothing seems good enough for the anonymous hordes––or for Kasim, who is growing closer to Lark, just like it used to be between them . . .

In the end, Lark must embrace their right to their messy emotions and learn how to be in love.

LARK & KASIM START A REVOLUTION is an intriguing YA contemporary about making mistakes, honesty, and neurodivergence. Lark is nonbinary and dreams of being a writer. They are currently working on a novel that they are shopping around with agents, while their main character manifests in a way that they can talk to. The rejections of querying hurt and are confusing, but they are growing their twitter following to help gain traction for their book. One day, when they send out a new tweet, they show it to their (former) friend, Kasim.

Kasim frequently hangs out at Lark’s even though they aren’t best friends anymore. When looking at Lark’s account, he accidentally sends a new thread from their account rather than his own. Lark is surprised by the thread going viral, especially since they did not write it – and it is about being in love with someone who does not seem to return your feelings. When Kasim asks them not to tell anyone, Lark decides to claim it as their own. However, this spirals out of control, leading them to confess their crush on another non-binary student and feel the weight of that lie. As time continues, Lark will have to decide who they are going to be and how they will handle their confusing feelings about romance and social media.

What I loved: Lark is a compelling character who is dealing with life the best they can. Social media can be a tough to swallow, as Lark begins to learn after the viral tweet. The book contains some responses that they receive, both the good and the bad, which show the reader the cruelty and kindness of the internet – but all the consequences of putting yourself out there. Lark is also contending with it being a lie, and the way different people in their offline life have reacted to it.

Lark is also neurodivergent without knowing exactly what their diagnosis would be (they consider either ADHD and/or autism), but they are generally comfortable in their own mind. Although they have some are still figuring things out, Lark is learning to cope with rejection and deal with the landmarks that people are creating to call them out. The story really presents the difficulty of situations around criticism, the subjectivity of such, and the trouble with social media and clout-chasing.

The primary story was really around Lark and their journey. However, the romance was also interesting. The book features several non-binary characters as well as polyamorous couples and the idea of throuples. The way people come together and the motives that they may have in doing so as well as the way that others should treat you in relationships are all touched upon in the story.