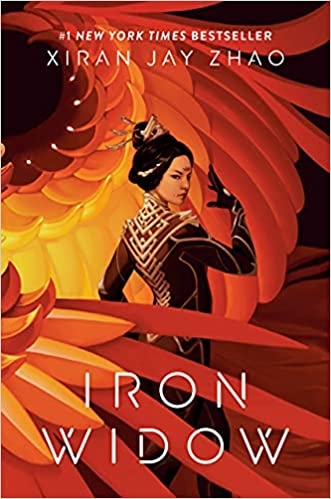 Pacific Rim meets The Handmaid’s Tale in this blend of Chinese history and mecha science fiction for YA readers.

The boys of Huaxia dream of pairing up with girls to pilot Chrysalises, giant transforming robots that can battle the mecha aliens that lurk beyond the Great Wall. It doesn’t matter that the girls often die from the mental strain.

When 18-year-old Zetian offers herself up as a concubine-pilot, it’s to assassinate the ace male pilot responsible for her sister’s death. But she gets her vengeance in a way nobody expected—she kills him through the psychic link between pilots and emerges from the cockpit unscathed. She is labeled an Iron Widow, a much-feared and much-silenced kind of female pilot who can sacrifice boys to power up Chrysalises instead.​

To tame her unnerving yet invaluable mental strength, she is paired up with Li Shimin, the strongest and most controversial male pilot in Huaxia​. But now that Zetian has had a taste of power, she will not cower so easily. She will miss no opportunity to leverage their combined might and infamy to survive attempt after attempt on her life, until she can figure out exactly why the pilot system works in its misogynist way—and stop more girls from being sacrificed.

I’m not sure my words can do this book justice. Iron Widow by Xiran Jay Zhao is a sci-fi novel unlike any I’ve read. It touches on issues like racism, rape, misogyny, murder, and femicide just to name a few while also exploring gender roles and turning them on their heads. This is NOT for the faint of heart. Following the story of one girl’s quest for vengeance, Iron Widow takes you on a heart-stopping, bloody adventure that will leave your head spinning and your heart aching.

Wu Zetian is an easy character to root for. Told entirely from her perspective, the story unfolds as Zetian faces one heartbreak after another. Zetian is tired and fed up with the role she is forced into in her life. Watching her sister die on national television was the final straw. Zetian is out for revenge, and she will stop at nothing to obtain it, even denying herself a life of ease and happiness with the only boy that makes her feel something other than hate. To avenge her sister, Zetian offers herself as a concubine-pilot for the Huaxian army of Chrysalises.

The entire system and world that Zetian lives in is based on a misogynistic view that women are inferior to men (this is where The Handmaid’s Tale reference comes into play). I personally loved how the author incorporated Chinese history here in the binding of Zetian’s feet and even how she used the Yin and Yang symbol to represent the pilots’ seats in the Chrysalises, not to mention the concubine sacrifices in battle. It’s truly horrific, making you root for Zetian to succeed all the more.

And succeed she does, over and over again. Each time more bloody than the last, testing the patience of those in power. But Zetian isn’t alone. She has Gao Yizhi and Li Shimin. These two couldn’t be more different, but somehow compliment Zetian and her battle. Like her, they will fight to the death for what they believe in. Shimin is the feared Iron Demon, someone that the country believes is the worst of the worst criminals, and yet because of his strong qi and ability to pilot the Chrysalises, he is also the most popular pilot. Yizhi is a son of one of the highest officials, yet he believes that women and men are equals. It is easy to see Zetian’s attraction to both boys and how the three form a relationship. This relationship is the backbone of the plot, most of the action and wins they receive wouldn’t have happened otherwise.

Overall, I really enjoyed Iron Widow. I listened to an audiobook copy, and the narrator is fantastic. I loved hearing how to pronounce some of the names, but also she breathes life into the characters, adding a sense of urgency to the plot and endearing them to the reader even more. If you are a fan of science fiction, then you need to read this one. It is required not just recommended.