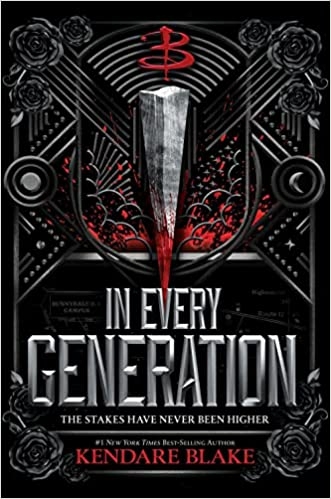 Return to Sunnydale in a brand-new series by New York Times best-selling author Kendare Blake, set in the world of Buffy the Vampire Slayer.

Frankie Rosenberg wasn’t yet alive when her mom, Willow, her aunt Buffy, and the original Scooby Gang destroyed the Hellmouth and saved the world from the First Evil. These days, life in New Sunnydale is blissfully quiet. Frankie is just trying to survive her sophomore year at the rebuilt high school and use her budding magical powers to make the world a better place.

But that world is suddenly plunged into danger when the slayer community is the target of a deadly attack, leaving the future of the line uncertain. Then Frankie discovers she’s sort of freakishly strong. Oh, and there’s something Willow never told her about her true identity.

Quicker than she can carve a stake, Frankie discovers there’s more to saving the world than witty one-liners and stupid hot demons. now everyone looks to her for answers, but speaking up has never been her strong suit. And it’s hard to be taken seriously when your mom is such a powerful witch she almost ended the world once, while your greatest magic trick is recycling.

Despite the many challenges standing in her way, Frankie must assemble her own bumbling Scooby Gang, get dressed up in Buffy’s (vintage ’90s) clothes, and become a new slayer for a new generation―before whatever came for the rest of the slayers comes for her next.

Frankie has grown up with the high stakes, life-or-death stories of Buffy, Xander, Spike, Oz, and Willow (her mom). The redeveloped Sunnydale is now, more or less, normal, and Frankie just wants to pass her classes and practice her eco-witchcraft. When an explosion rocks the spot all the slayers had just gathered, Frankie’s future takes a sharp turn. Now, no one can tell if any slayers, let alone Buffy, are still alive, and suddenly, Frankie is really strong and able to fight vampires. As Frankie begins to assemble her own Scooby gang, they will have to combat the evils in Sunnydale who are ready to stretch their legs with the rumor that the slayers have died.

IN EVERY GENERATION is a fun callback to the vibes of early Buffy seasons. The humor is high, the one-liners are quippy, and it takes a team of lovable oddballs to save the world. Frankie is a refreshing protagonist, one who lacks the confidence of her aunt Buffy. Once she realizes she’s been called as a slayer, she struggles with insecurity. There has never been a slayer-witch before, and she’s barely developed her magic, let alone her newfound slayer abilities. While her aunt was able to take down bad guys while wearing heels and rocking great hair, Frankie can barely run away fast enough to not get killed. I love how Frankie keeps trying and how she learns to accept support from her own Scoobies (including her werewolf best friend, a Sage demon, and the sister of one of the potentially deceased slayers).

While I loved Frankie and her gang, I hoped the tone would focus more on their fresh adventures rather than the nostalgia. As an adult reader, I loved the Oz and Willow scenes (and am absolutely invested in what the sequels might hold for them), but between their scenes when they’re alone together, Spike’s role, and the situation with the slayers, I’m not sure teen readers will find this an accessible entry into the Buffyverse. Even as someone who has seen the show and read Buffyverse books, I still had to refresh myself on some background in order to keep up.

While I’m not sure I would recommend this to a teen unless they were already familiar with the Buffyverse and okay with a strong dose of nostalgia, I definitely highly recommend IN EVERY GENERATION to older Buffy fans who loved the excitement and humor that enthralled viewers in the early Buffy seasons.

You are here: Featured Review: In Every Generation (Kendare Blake)