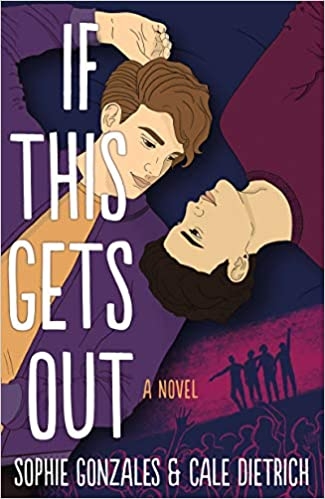 Eighteen-year-olds Ruben Montez and Zach Knight are two members of the boy-band Saturday, one of the biggest acts in America. Along with their bandmates, Angel Phan and Jon Braxton, the four are teen heartthrobs in front of the cameras and best friends backstage.

But privately, the pressure to stay in the closet has Ruben confiding in Zach.

On a whirlwind tour through Europe with an unrelenting schedule and minimal supervision, the two come to rely on each other more and more, and their already close friendship evolves into a romance. But when they decide they’re ready to tell their fans and live freely, Zach and Ruben realize they will never truly have the support they need.

How can they hold tight to each other when their whole world is coming apart?

IF THIS GETS OUT is an engaging and emotional YA contemporary about two members of a boyband. Ruben and Zach are half of the boyband Saturday, going on an international tour. At 18, they would theoretically be able to take charge of their own lives, but their handlers working for their label would certainly say otherwise. Ruben is out to everyone who matters, but the label is keeping him in the closet because of their perception of the way fans would react.

Ruben is secretly in love with his best friend, but knows it could never be, as he is straight. That doesn’t help with his crush though. However, one night, his seemingly straight friend puts the moves on him. The cascading events cause a rift that seems to threaten to break up the band, while Zach questions his identity and Ruben can’t figure out how to get his friend back. As they both find their way to where they want to be, they must also confront the truths of their band, their label, and their families – and figure out who they want to be at the risk of possibly everything.

What I loved: The relationship here was really beautiful, and I loved the way it evolved from friends to more, as well as the personal realizations each has around it and how they support each other from there on. There are also some pretty heavy themes around childhood stardom, record labels and their abuses, alcohol and substance abuse, coming out, and family issues. These were all handled really well, and I found them really thought-provoking. In particular, a major one was the record label, how they take advantage of young talent and the ways in which they exploit and protect their interests to the detriment of the individuals. Their control is far-reaching with broad impacts on interviews, presentation, and even dance moves and clothing.

There is also a tough theme around parents, with Ruben beginning to think about how to handle the volatile relationship he has with his mother, balancing the obligation with mental health. On the other side, we see a healthier relationship between Zach and his mother, but even this relationship sees challenges as Zach begins finding his independence, particularly around coming out. The coming out will feel recognizable to readers who have also begun to define their identity and struggle with where/when to come out, situations where it feels forced and tough receptions as well as the power in good reactions.

The pace on this was really great, and I definitely stayed up later than anticipated because I got so into it! It’s a really riveting and intense read that is sure to keep readers hooked. While it is mostly character driven, the pace feels just right and the writing is very compelling.

Final verdict: A riveting character-driven YA contemporary, IF THIS GETS OUT is a beautiful read about finding and embracing yourself amongst all life’s challenges – and even more when you’re in a boyband.

You are here: Featured Review: If This Gets Out (Sophie Gonzales and Cale Dietrich)