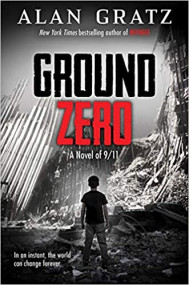 In time for the twentieth anniversary of 9/11, master storyteller Alan Gratz (Refugee) delivers a pulse-pounding and unforgettable take on history and hope, revenge and fear — and the stunning links between the past and present. September 11, 2001, New York City: Brandon is visiting his dad at work, on the 107th floor of the World Trade Center. Out of nowhere, an airplane slams into the tower, creating a fiery nightmare of terror and confusion. And Brandon is in the middle of it all. Can he survive — and escape? September 11, 2019, Afghanistan: Reshmina has grown up in the shadow of war, but she dreams of peace and progress. When a battle erupts in her village, Reshmina stumbles upon a wounded American soldier named Taz. Should she help Taz — and put herself and her family in mortal danger? Two kids. One devastating day. Nothing will ever be the same.

Sadly Needed for the Twentieth Anniversary
This book delivers the stories of both Brandon, a nine year old in New York City during the 9/11 attacks, and 11-year-old Reshmina, who lives in Afghanistan in the present day. Brandon has to go to work with his father, who works in Windows on the World in the World Trade Center because he got in trouble at school. He likes being with his father, but has made plans to run an errand in the underground mall when he gets a chance. This happens when there is a kitchen fire. Brandon sneaks off, but the elevator in which he is riding stops. The people in the elevator all work together to get out onto one of the floors, but when they do, they find that a plane has flown into the building. Brandon is frantic about his father and tries to go up to the restaurant, only to find he can’t get there. With the help of Richard, a man whom he and his father had helped earlier that morning, Brandon tries to get out of the World Trade Center, which is no easy feat. In Reshmina’s story, her family has suffered greatly over the years that the Taliban has been struggling for dominance and the US troops are in place trying to help. Many members of her family have been killed, including an older sister, at whose wedding celebratory gun shots were mistaken for attacks and resulted in the wedding party being attacked. Reshmina would like to be a teacher and move to Kabul, so is learning English, but her mother just wants her to get married young. Her grandmother, however, remembers Afghanistan before Taliban control, when women could hold jobs and even wear mini skirts, and consuls Reshmina to try to understand her mother’s point of view. When Reshmina finds a wounded US soldier, she has him follow her home to get help, but this puts her family and entire village in grave danger. Both children have to fight against the odds to survive, and in the end, are more connected than we could have imagined.
Good Points
This was absolutely harrowing. The details of what Brandon and Richard had to do just to get out of the building were vivid without being too graphic, and made me feel like I was right there. The same is true of Reshmina’s struggles to try to keep her family safe when her twin brother is determined to join the Taliban and her village is under attack. There is a lot of information about what life was like for Reshmina, which was quite interesting, and the politics of the situation were well balanced. Notes at the back are helpful for young readers who won’t have as much familiarity with the topic. This is probably the best book about 9/11 that I’ve read. It’s a perfect accompaniment to Arash and Reedy’s Enduring Freedom.

There are a number of nonfiction books about 9/11; I know because I purchased many of them for my school library in 2002! I expect that there will be a number of books coming out this year. It’s fairly easy to find fiction books on this topic, and several such as The Big Apple Diaries and a graphic novel version of Tarshis’ I Survived the Attacks of 9/11 are coming out in 2021. There are not a lot of books about Operation Enduring Freedom (Spradlin’s biography, Ryan Pitts : Afghanistan, Patterson’s Operation Oleander, McKay’s Thunder over Kandahar, Reedy’s Words in the Dust and Massey’s Torn are the only ones that come to mind), so it’s good to see some coverage of this as well.

Boop the Snoot
I Really Want to Be First: A Really Bird Story
I Really Want a Bigger Piece: A Really Bird Story
Beguiled
The Only Me
The Witch Hunt
The Love Match
Manifest
A Thousand Heartbeats
Alone Like Me
Saving the Butterfly
Stop and Smell the Cookies
How To Be A Rock Star
Growing an Artist: The Story of a Landscaper and his Son
The Blood Traitor (The Prison Healer Book 3)
The Lucky List
That's Not My Name
The Merchant's Curse (The Harwood Mysteries #4)
Miraculous
Out of the Blue
The Witchery
Azreya, Aztec Priestess
The Twins of Moon
The Sea of Stars: Book 2 of The Twins of Moon
The Undead Truth of Us
A Girl's Guide to Love and Magic
No Admissions (The Infamous Frankie Lorde #3)
Daybreak on Raven Island
Something Beautiful
Something About Grandma

You are here: Featured Review: Ground Zero by Alan Gratz