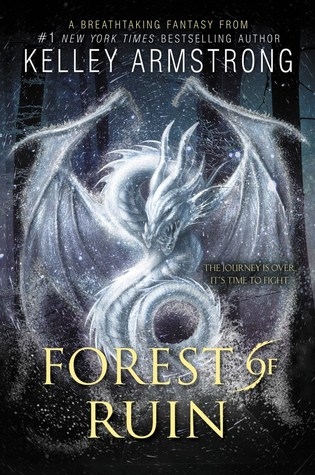 Perfect for fans of Graceling and Game of Thrones, this is the breathtaking conclusion to the Age of Legends trilogy—from #1 New York Times bestselling author Kelley Armstrong. The empire rests on the edge of a knife, and sisters Ashyn and Moria are the handle and the blade. Desperate to outmaneuver the evil Alvar Kitsune, whose hold on the people grows stronger every day, Emperor Tatsu begs Moria to put aside past grievances and ally with Gavril—at least long enough to make an attempt on Alvar’s life. Meanwhile, reunited with her long-lost grandfather, Ashyn discovers that she is the key to a ritual that could reawaken an ancient dragon and turn the tide of the coming battle in their favor. But with lies and betrayal lurking around every corner, Ashyn and Moria will have to decide once and for all where their allegiances lie. And it may not be where their hearts would lead them. . . . In this third and final book in her epic and enchanting trilogy, #1 New York Times bestselling author Kelley Armstrong blends fantasy, action, and romance to give readers the unforgettable ending they’ve been waiting for.

In this third and final installment in the Age of Legends trilogy, Moria and Ashyn are desperate to defeat Alvar Kitsune and rescue the empire and their village’s children. While Moria must force a tentative alliance with Gavril in effort to take Alvar down, Ashyn is reunited with a grandfather she never knew who believes she is the key to a special ritual. With deception and danger all around them, the twins will have to watch their backs if they want to stay alive.

What I Loved:Ever since I read the first book in this series, I’ve both dreaded and anticipated the last book. I wanted so badly to find out what happens to the characters I love so much, but I also never wanted their story to end. This final book delivers all the action expected from the previous two books and more. Moria and Ashyn still face some of the dangers of previous books, such as the shadow stalkers, but a few new creatures are introduced, adding to the rich world building. The dragons are hands down my favorite addition. The plot twists seem somewhat less than previous books, but their impacts are just as big. The plot twist during the climax is one of my favorites, showing real emotional sacrifice from one character. The ending answers all major questions for the most part, though it does wrap up a little quickly.

What Left Me Wanting More:As powerful and intense as the action is, it wasn’t well balanced with the emotional side of the story. Most of the characters’ reactions feel a bit rushed over, and I had a harder time connecting with the characters this time because of that. However, readers who are primarily in for the action will definitely not be disappointed. Alongside that, specifically Ashyn’s side of the story comes across as neglected. Her character does grow, but her chapters are so spread out between Moria’s that it doesn’t feel as strong. The plot almost seems to leave her behind as Moria, Gavril, and Tyrus are focused on. The sister bond between Moria and Ashyn that was so well established in the first book is significantly missing from this one, and one sister isn’t even present during the big climatic scene.

Final Verdict:Though the lack of developed emotion and imbalance of the sisters’ sides are disappointing, FOREST OF RUIN captures the intense action, rich world building, and fiery romance that Kelley Armstrong fans expect and adore.

You are here: Featured Review: Forest of Ruin