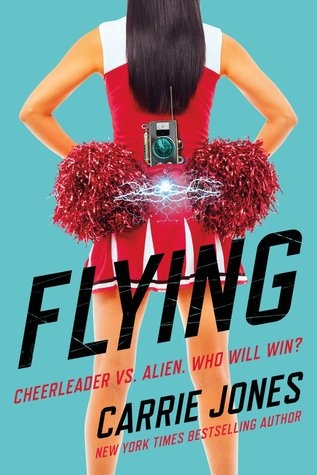 People have always treated seventeen-year-old Mana as someone in need of protection. She’s used to being coddled, being an only child, but it’s hard to imagine anything could ever happen in her small-town, normal life. As her mother’s babying gets more stifling than ever, she’s looking forward to cheering at the big game and getting out of the house for a while. But that night, Mana’s life goes haywire. First, the hot guy she’s been crushing on at school randomly flips out and starts spitting acid during the game. Then they get into a knockdown, drag-out fight in the locker room, during which Mana finds herself leaping around like a kangaroo on steroids. As a flyer on the cheerleading squad, she’s always been a good jumper, but this is a bit much. By the time she gets home and finds her house trashed and an alien in the garage, Mana starts to wonder if her mother had her reasons for being overprotective. It turns out, Mana’s frumpy, timid mom is actually an alien hunter, and now she’s missing–taking a piece of technology with her that everyone wants their hands on, both human and alien. Now her supposed partner, a guy that Mana has never met or heard of (and who seems way too young and way too arrogant to be hunting aliens), has shown up, ordering Mana to come with him. Now, on her own for the first time, Mana will have to find a way to save her mother–and maybe the world–and hope she’s up to the challenge.

Mana suffers from a little anxiety, but her Mom and her best friend, cross country runner and cheerleader Lyle, take good care of her. She has a bit of a crush on hunky Dakota, so when she sees him being hustled into a locker room by a beefy man wearing sunglasses, she goes after him. A cheerleader with great gymnastic skills, she’s still impressed and surprised with herself when she knocks over a row of lockers and kicks holes in the ceiling. When she witnesses Dakota spit acid (first verbally, with racist comments, then literally), she’s inclined to believe the sunglasses wearing man that something is wrong. When she finally returns home, her house is trashed and her mother is missing. She ends up spending the night at Lyle’s house, which doesn’t make his mother happy. Even though Lyle’s well-developed musculature is becoming more and more intriguing, Mana knows she must find her mother and stop whatever alien incursion is developing. It’s not easy to do when she’s not entirely sure what side she should be on, Lyle starts to return her romantic interest, and she finds out secrets about herself.

Good Points
This was an absolutely delightful read, filled with deft turns of phrase that made me snort though my nose. Mana, who is partially of Asian descent, is a heroine with which to be reckoned; she has no patience for the wendigo type creatures that are trying to exterminate her OR for any racist or sexist remarks. (My favorite retort: “Wildcat? For God’s sake, really? How freaking sexist are you? Women are not cats. Or dogs. Or animals of any kind. But thank you for at least not making me domesticated.” (pg. 125, ARC))

While the hysterically coded terms for the “funky vertical monkey”, etc. make this is more appropriate for young adult readers, those are the readers who will also best appreciate the lack of black and white villains. The man in the sunglasses, China, says to trust no one. Does that include him? No one is what they appear to be, with the possible exception of Lyle. Mana’s increasing appreciation of Lyle’s hotness will also resonate with the teen crowd.

Jones’ Need series gives me hope that this also will become a series– there are so many questions at the end of the book that another volume is certainly in order. While the audience for this is all over the map (there are cheerleaders, cross country runners, Men in Black type characters, a cooking baking mother, AND aliens who spit acid), this is a fantastic, fun read for just about any teen who enjoys humorous books with lots of action and adventure… with a touch of romance thrown in for good measure.