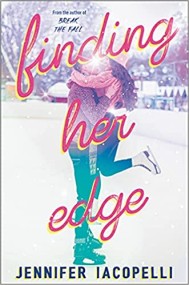 With gold-medalist parents, and her older sister headed to the Olympics, all she wants is to live up to the family name and stand atop the ice dance podium at the Junior World Championships. But fame doesn’t always mean fortune, and their legendary skating rink is struggling under the weight of her dad’s lavish lifestyle. The only thing keeping it afloat is a deal to host the rest of the Junior Worlds team before they leave for France.

That means training on the same ice as her first crush, Freddie, the partner she left when her growth spurt outpaced his. For the past two years, he’s barely acknowledged her existence, and she can’t even blame him for it.

When the family’s finances take another unexpected hit, losing the rink seems inevitable until her partner, Brayden, suggests they let the world believe what many have suspected: that their intense chemistry isn’t contained to the ice. Fans and sponsors alike take the bait, but keeping up the charade is harder than she ever imagined. And training alongside Freddie makes it worse, especially when pretending with Brayden starts to feel very real.

As the biggest competition of her life draws closer and her family’s legacy hangs in the balance, Adriana is caught between her past and present, between the golden future she’s worked so hard for, and the one she gave up long ago.

‘Finding Her Edge’ by Jennifer Iacopelli is a light-hearted, sweet young adult story with a mix of themes, including dedication, motivation, self-worth, endurance, and, of course, romance.

Adriana has always felt like she’s in her sister Elisa’s shadow. While Elisa is preparing for Olympic stardom, Adriana is partnering with Brayden, Elisa’s ex, for her own shot at stardom doing ice dancing. Something more seems to be there with Brayden, but Adriana doesn’t want to see it, though she can’t help but notice how cute and sweet Brayden is to her. When it seems like something more might be bubbling up between them, her old partner, Freddie, comes to train at her family’s ice rink, and there is a bit of feelings overload at play. No one is saying what they really feel, and there is a lot of tension. Throw into the mix Freddie’s new partner, Riley, who has her own crush on him, and a love triangle gets turned into a love square pretty quickly.

While Adriana tries to find herself and gain independence from her father and older sister, whom she always feels somewhat less than, she has conflicting feelings about Brayden and Freddie, not knowing quite where she stands with either of them. Not helping matters any is the fact that they all have to focus intensely on their goals, the dreams they’ve had for years—to win gold medals along the way and junior championships and then make it to the Olympics to do the same.

When things don’t go as planned for her older sister, Elisa, Adriana steps into the spotlight herself, with two cute guys surrounding her, and a whole host of people counting on her. While the story might seem predictable, it was far from it, with uncertainty about who she might end up with, and a strong hope to see her grow into someone who can stand up for herself and what she believes in without fear of someone quashing her dreams in the meantime.

The story will not only make readers swoon, but it will make them ponder what they believe in and want to stand up for, even if they are worried they might lose quite a bit in the process. Jennifer Iacopelli has crafted a well-rounded, enjoyable story that mixes the beauty of figure skating and ice dancing with the wonder of young, but enduring, love.

Good Points
The story will not only make readers swoon, but it will make them ponder what they believe in and want to stand up for, even if they are worried they might lose quite a bit in the process. Jennifer Iacopelli has crafted a well-rounded, enjoyable story that mixes the beauty of figure skating and ice dancing with the wonder of young, but enduring, love.

You are here: Featured Review: Finding Her Edge (Jennifer Iacopelli)