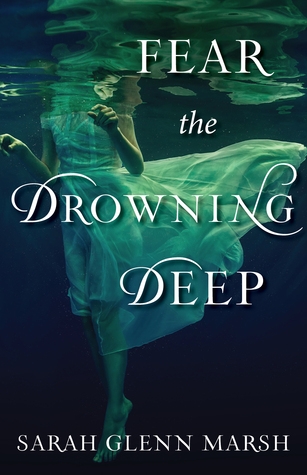 Witch’s apprentice Bridey Corkill has hated the ocean ever since she watched her granddad dive in and drown with a smile on his face. So when a dead girl rolls in with the tide in the summer of 1913, sixteen-year-old Bridey suspects that whatever compelled her granddad to leap into the sea has made its return to the Isle of Man. Soon, villagers are vanishing in the night, but no one shares Bridey’s suspicions about the sea. No one but the island’s witch, who isn’t as frightening as she first appears, and the handsome dark-haired lad Bridey rescues from a grim and watery fate. The cause of the deep gashes in Fynn’s stomach and his lost memories are, like the recent disappearances, a mystery well-guarded by the sea. In exchange for saving his life, Fynn teaches Bridey to master her fear of the water — stealing her heart in the process. Now, Bridey must work with the Isle’s eccentric witch and the boy she isn’t sure she can trust — because if she can’t uncover the truth about the ancient evil in the water, everyone she loves will walk into the sea, never to return.

An Eerie but Beautiful Trip to the Isle of Man

Fear the Drowning Deep by Sarah Glenn Marsh is a captivating tale that plunges its readers into some of the dark secrets found in the deep blue sea. Mixed with myths, romance, and a peculiar kind of magic, readers will surely find themselves flipping pages—and dreading the end.

One of my favorite things about this book is the setting. I wasn’t entirely familiar with the Isle of Man and now I am absolutely in love with it. Sarah Glenn Marsh gives us a view of how it was around the 1900s and the experience felt so real—almost as if I stepped inside its pages! The mystery, the witchcraft, its inhabitants, and everything else are well written and I wish this book would have been a bit longer just to explore more of this luscious landscape.

This book also has a great cast of characters, but my favorite, hands down, is Morag, the “witch” of the Isle. This character is mysterious and on first sight, the type you would want to stay far away from. However, Morag is a person who has dealt and seen a lot in all her years, and deep down, the kind of grandma anyone would want to have in their lives (though I’m pretty sure she would not be fond to be classified as such). I love this character so much and I hope to read more from her one day!

The main character, Bridey, is also a favorite, along with Fynn (the mysterious boy who washes up to shore), and Bridey’s family. I write about them together (as one) since they all have a great relationship with each other, something that is at times hard to come by.

Last but not least, the whole myth and folklore mixed with witchcraft. It’s an unusual combination and one that works magnificently in this novel. Nothing short of bewitching!

While I love Bridey and Fynn together, I feel that their romantic moments aren’t as magical and wondrous as I wanted them to be. Usually, the build-up to a relationship is what gets the magic going, but things between Bridey and Fynn happen quite fast, there isn’t truly enough time to start wishing for things—like their first kiss—before it’s already happening. Since I’m a huge fan of build-ups, this saddened me a bit.

Fear the Drowning Deep is the debut novel of Sarah Glenn Marsh and one you definitely want to have on your TBR! It’s dark, hypnotizing, and one that will have you wondering about the mysteries of the deep.

Good Points
Beautiful setting description and great use of myths/folklore of the Isle of Man.