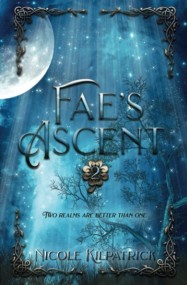 May the road rise up to meet her. After barely escaping Alistair’s clutches, Clover struggles to unleash and master her dormant powers as she embraces her merrow lineage while still staying true to her human self. With the Seelie and Unseelie armies on the verge of war, the clock is ticking, but when a centuries-old secret is uncovered, alliances and loyalties are put to the test and both her worlds come crashing down around her. To defend against Alistair, protect the fate of the Fae, and safeguard her loved ones, Clover must soar higher than she’d ever thought possible. In this action-packed sequel, the very loss and heartache that could lead to Clover’s ruin could also lead to her redemption. The choice is hers.

FAE’S ASCENT by Nicole Kilpatrick is an exciting and jam-packed sequel to CLOVER. The book picks up after the Seelies have temporarily defeated Alistair. To prepare for his next move, Clover is encouraged by Queen Helena and her family to train and develop her magic, which leads to daily lessons with her mother. Clover struggles to advance at a consistent pace, and then on top of that, Finn has to leave on a recruiting mission for their military, placing new stress on their relationship. Before Clover knows it, her whole world looks different. Those who have been friends become enemies and those who have been enemies become friends. Unable to predict what will be next, Clover must learn to trust and rely on herself.

I absolutely love this book as it’s exactly what I want from a sequel: it puts us even more firmly inside the world that’s been created, it deepens our love for existing characters, and it introduces us to new ones. For instance, we get to spend a bit more time with Kean, who becomes more than just another dating option for Clover. Without giving too much away, it’s further established how much of a catch and good guy he is, and I really enjoy his storyline. On the other hand, I also had fun getting to meet all of Clover’s merrow family and exploring the world beneath the waves. Kilpatrick does a phenomenal job at balancing the old with the new and incorporating them both seamlessly.

The plot twists in this book are totally unexpected! Other than further conflict with Alistair, I honestly could not have guessed at what would come next after the ending in CLOVER. Kilpatrick not only exceeded my expectations but added real momentum and scope to the story. Then, getting to witness how all the characters react and respond to the events that happen helped deepen my connection to them and made me care about them even more.

Overall, FAE’S ASCENT improves upon book one in the series in all the best ways. Anyone who loves stories set in the Seelie court, Celtic folklore, and a good love triangle should add this series to their TBR.