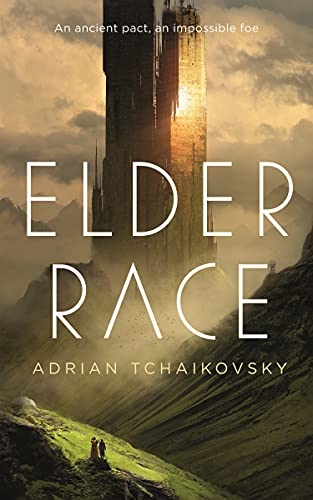 In Adrian Tchaikovsky’s Elder Race, a junior anthropologist on a distant planet must help the locals he has sworn to study to save a planet from an unbeatable foe.

Lynesse is the lowly Fourth Daughter of the queen, and always getting in the way.

But a demon is terrorizing the land, and now she’s an adult (albeit barely) with responsibilities (she tells herself). Although she still gets in the way, she understands that the only way to save her people is to invoke the pact between her family and the Elder sorcerer who has inhabited the local tower for as long as her people have lived here (though none in living memory has approached it).

But Elder Nyr isn’t a sorcerer, and he is forbidden to help, and his knowledge of science tells him the threat cannot possibly be a demon…

To the queen (her mother) and the court, Lynesse the Fourth Daughter is at best, a nuisance, and at worst, an embarrassment. When reports of a demon terrorizing and infecting the land arrive, Lynesse believes her time to prove her worth has come. She sets out with her companion, Esha, to find Nyr, the Elder sorcerer her ancestors made a pack with. When Nyr meets Lynesse, asking him for magic to stop the demon, he knows he’s already too close to her world than he should be, as a secondary anthropologist. His duty is to study their planet, not get involved with it. But the long years alone, combined with the silence from his home for the last several centuries, persuades him to help, even though what they think is magic is only advanced science. Neither Lynesse nor Nyr are prepared for the enemy they face, and neither magic nor science may be able to help them in the end.

This is the first Adrian Tchaikovsky book I’ve read, and I’m glad I tried it! ELDER RACE is an interesting combination of perspectives where one character believes the world around her contains magic, and the other understands the exact advanced science (mostly) they call magic. Nyr’s story is told in first POV, while Lynesse’s is told in third. Nyr is a tragic hero, long abandoned (intentionally or not) by his own people and left in a position where he is only supposed to observe and study, never care or intervene. He is achingly lonely, and to Lynesse’s people, considered the last of his kind. His struggle with depression is heartbreakingly authentic.

The reader doesn’t get as intimate a look inside Lynesse’s head since her POV is third person, but she remains a compelling character. She has been looked over for so long, made fun of by her more important siblings, and everyone but her companion seem to doubt her capabilities. She is willing to sacrifice everything she has and is to prove herself and save her people.

While I loved the characters, the conclusion left a little to be desired. A couple of big questions never got answered, like what the ‘demon’ actually was or what it wanted and what happened to Nyr’s people. As a character-driven novella, this wasn’t too unexpected, but it made the ending less satisfying.

Overall, ELDER RACE is a story of a secondary anthropologist failing miserably to not care about the people around him and his journey to embrace a new, unexpected life for himself.