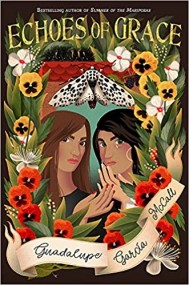 In Eagle Pass, Texas, Grace struggles to understand the echoes she inherited from her mother–visions which often distort her reality. One morning, as her sister, Mercy, rushes off to work, a disturbing echo takes hold of Grace, and within moments, tragedy strikes.
Attending community college for the first time, talking to the boy next door, and working toward her goals all help Grace recover, but her estrangement from Mercy takes a deep toll. And as Grace’s echoes bring ghosts and premonitions, they also bring memories of when Grace fled to Mexico to the house of her maternal grandmother–a woman who Grace had been told died long ago. Will piecing together the truth heal Grace and her sister, or will the echoes destroy everything that she holds dear?
*Review Contributed by Kim Baccellia, Staff Reviewer*
Grace struggles to understand her gift of ‘echoes’ where she has visions that distort her past. One morning when tragedy hits, the echoes come full force. One of them has her remembering three years previously when she escapes after her mother’s murder to Mexico. Once there she stumbles into the home of her grandmother. A grandmother she was told had died. But once there she finds her grandmother is very much alive. Past and present mingle together into a huge puzzle. A puzzle Grace tries to piece together to find the truth about what really happened to her mother. She needs to do this in order to heal both her and her sister.

What worked: Wow. Just wow. I love McCall’s novels and this one held me on the edge of my seat. Such powerful writing! Grace has echoes or visions. This gift runs in her family. The relationship between Grace and her sister Mercy is so real and authentic. Grace is the nurturing one in the family and when tragedy hits, that’s when her visions grow stronger.

Love the Mexican backdrop and how McCall shows a family in need of healing. There are secrets that hold back the family from moving forward. The weaving back and forth between time works. Readers see what happened three years previously in a small Mexican town. The trauma holds on to Grace’s grandmother’s house like a poltergeist with a horrific secret.

The relationship between Grace and Mercy is a complex one. Just like how it is with sisters. There’s a bond that is tested and one that needs secrets to be revealed in order to heal.

Atmospheric contemporary Latinx Gothic tale meets Rebecca where visions lead a girl to confront deadly secrets from the past in order to heal. Totally recommend!

Shady Baby Feels: A First Book of Emotions
Wait For Me
Unsolved Case Files: The 500 Million Dollar Heist: Isabella Stewart Gardner and Thirteen Missing Masterpieces (Unsolved Case Files, 3)
Squad Up (A Power Up Graphic Novel)
The Black Slide
Shot Clock (Shot Clock #1)
What We Saw: A Thriller
The Legend of the Lost Boy (The Pathfinders Society #3)
Nothing Interesting Ever Happens to Ethan Fairmont
Who Was Che Guevara?
Who Was Celia Cruz?
Sometimes Love
Undercover Latina (The Factory)
Arab Arab All Year Long!
Peace Is a Chain Reaction: How World War II Japanese Balloon Bombs Brought People of Two Nations Together
It's a Numbers Game! Football
Sandor Katz and the Tiny Wild (Food Heroes, 4)
The Harvey Milk Story
Bottle Tops: The Art and Life of El Anatsui
Indelible Ann: The Larger-Than-Life Story of Governor Ann Richards
Outside, You Notice
Cocoa Magic
The Power of Architecture: 25 Modern Buildings from Around the World
I Am Coco: The Life of Coco Chanel
Amy Wu and the Warm Welcome
Katie and the Cupcake Cure The Graphic Novel (1)
Meet Me Halfway
Hippos Go Berserk!: The 45th Anniversary Edition
Elephant's Big Solo
One Sky