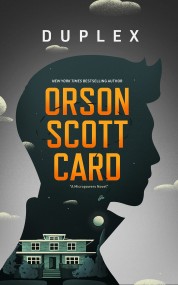 Ryan wakes up to find his contractor dad building walls to turn their big old house into a duplex. The family that moves into the other side includes Bizzy Horvat, the pretty girl he has a crush on at school. Bizzy claims her mother is a witch with the power to curse people with clumsiness or, in Bizzy’s case, astonishing beauty.

When a bee gets caught in Bizzy’s hair, Ryan acts so quickly and radically to save her from getting stung that he attracts the attention of a group of micropotents — people with micropowers. He soon realizes that Bizzy and her mother also have such powers. It becomes Ryan’s job, with the help of the other micropotents, to protect the Horvats from a group of witch hunters from their native country, who are determined to kill Bizzy, her mother, and all the other ”witches” — micropotents — who have gathered to protect them.

What worked:
The supernatural element of the plot is slowly sprinkled into the plot until it becomes a major conflict. Some characters have micropowers and they form a support group of micropotents to learn about their abilities. The unexpected twist is the powers are relatively useless but they are special abilities none-the-less. Making others yawn and being aware of the presence of spiders aren’t particularly useful in most situations. Bizzy is able to make herself stunningly beautiful, and Ryan can instantly react to situations perfectly. The micropowers aren’t remarkable but they’re enough to make the micropotents targets for witch hunters and create the main conflict of the plot.
Ryan is the fifteen-year-old main character, and he’s a dynamic young man. In the beginning, he seems to be a sassy, angry teenager due to his parents’ failed marriage. He’s actually very intelligent, caring, and has a high moral character. Ryan deeply misses his father living at home and he wants to earn his trust and respect. He strives to prove his maturity by becoming more responsible, and his efforts become part of his everyday behavior. His micropower causes him to do things he regrets, and this humility reflects his inherent kindness and heart. He does what needs to be done but it doesn’t mean he needs to like it.
Several types of interpersonal relationships are blended into the overall plot. Ryan and Bizzy explore becoming boyfriend/girlfriend and consider what that actually means. Bizzy’s beauty makes her skeptical of Ryan’s intentions, and Ryan’s never been with a girl that’s way out of his league. Ryan struggles with Defense’s pranking behavior and his newfound maturity makes it harder to tolerate the harm Defense is causing. Ryan’s parents are going through a nasty separation and the kids are stuck in the middle. Ryan and his sister feel anger toward the situation, and their mother is especially malicious toward the father. It’s not until later in the story that the kids discover the root of the problem.
What didn’t work as well:
The dialogue includes playful banter between Bizzy, Ryan, and his best friend Defense that sometimes lasts longer than necessary. The exchanges are usually entertaining and help to describe relationships, but their duration stalls the momentum of the plot.
The Final Verdict:
There’s power in working together. It’s a novel concept to endow characters with powers that aren’t especially useful, but it makes them underdogs readers can cheer for. The numerous levels of personal problems maintain interest throughout, and the main conflict builds to a suspenseful climax. I recommend you give this book a shot.