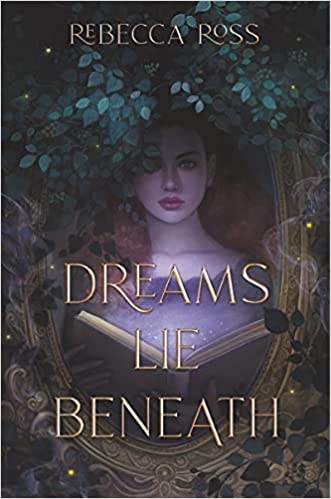 From Rebecca Ross, acclaimed author of The Queen’s Rising duology, comes a story about magic, vengeance, and the captivating power of dreams. A must-read for fans of The Hazel Wood and The Night Circus.

The realm of Azenor has spent years plagued by a curse. Every new moon, magic flows from the nearby mountain and brings nightmares to life. Only magicians—who serve as territory wardens—stand between people and their worst dreams.

Clementine Madigan is ready to take over as the warden of her small town, but when two magicians arrive to challenge her, she is unknowingly drawn into a century-old conflict. She seeks revenge, but as she gets closer to Phelan, one of the handsome young magicians, secrets—as well as romance—begins to rise.

To fight the realm’s curse, which seems to be haunting her every turn, Clementine must unite with her rival. But will their efforts be enough to save Azenor from the nightmares that lurk around every corner?

DREAMS LIE BENEATH is a riveting and enchanting YA fantasy with incredible world-building and intriguing characters. Clementine (Clem) works with her father as a Dream Warden. Their jobs are to record nightmares from residents of the town, and then, on the new moon, to dispel and banish whichever nightmare manifests. This uses their magical abilities as well as their physical and mental acumen, as they must fight the horrors of the nightmare and uncover the key to dispelling them.

Clem is satisfied with her life – until two magical strangers, Phelan and Lennox, show up in town to challenge her father for his wardenship. On the night of the new moon, if they are to dispel the manifested nightmare first, they will assume the wardenship of the town. When everything goes down as Clem had feared, she and her father leave town immediately with her father’s warnings about the boys and their mother ringing in her ears.

In their new life, Clem cannot forget nor forgive what was lost to them, and so, she enacts her own plan of revenge. As she gets closer to Phelan while under disguise, she finds that what she knew was only the tip of an iceburg so big that it could sink them all.

What I loved: This was an absolutely enthralling read, and I loved the slow, careful world-building with fantastic character development. This atmospheric read pulls you into this other world, where nightmares are feared even more as they have the ability to become real. The reader learns as Clem does about the truths and lies behind the mythology and the roles that these figures are to play in the coming danger. The plotting was absolutely brilliant, exposing just enough at every turn to keep the reader on their toes. The reveals were surprising, but I loved that in retrospect they all made sense and there was a path that was followed – truly masterful storytelling.

The characters were endlessly fascinating. Clem is someone with ambition and who is motivated by revenge, and she develops and evolves quite a lot throughout the story. Nothing is ever so simple, and as she learns more, the reader can see her growing. Phelan was another intriguing character, who sometimes felt like a pile of contradictions. His growth, through the eyes of Clem, was also fascinating to watch, and the way their relationship evolved was truly lovely. Other characters were also intriguing, such as Phelan’s mother, Mazarine, the Duke, and the other Dream Wardens we meet. I loved the little reveals to learning more about them and understanding the things that led to the ways they are. In some ways, this felt like a character driven story, as the characters were so strong, but there was a fantastic balance between the other plots and the characterizations that really made this a fascinating read.

The themes were also really thought-provoking around dreams, decisions, politics, trust, and motivations. As the story develops and we learn the fine line between myths and truths, the story also discusses the ways in which motivations can mold and drive individuals, with consequences that ripple throughout. Trust and loyalty is another theme that appears throughout, as the characters are frequently lying to each other – and to themselves, with some of them learning along the way.

Final verdict: With masterful world-building, clever plotting, and compelling characters, DREAMS LIE BENEATH is a beautifully crafted story about dreams, nightmares, and the lies we tell ourselves and others. Highly recommend for fans of THE HAZEL WOOD, THE BONE HOUSES, and THE SHADOWS BETWEEN US.

You are here: Featured Review: Dreams Lie Beneath (Rebecca Ross)