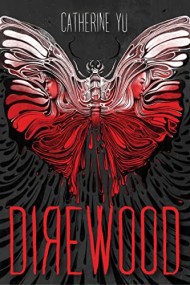 In this velvet-clad 1990s gothic horror, Aja encounters a charming vampire who wants to lure her into the woods—just like her missing sister.

No one ever pays attention to sixteen-year-old Aja until her perfect older sister Fiona goes missing. In the days leading up to Fiona’s disappearance, Aja notices some extraordinary things: a strange fog rolling through their idyllic suburban town, a brief moment when the sky seems to rain blood, and a host of parasitic caterpillars burrowing their way through the trees. Aja’s father, the neighbors, and even her ex-friend Mary all play down this strange string of occurrences, claiming there must be some natural explanation. It seems everyone is willing to keep living in denial until other teens start to go missing too.

Aja is horrified when she meets Padraic, the vampire responsible for all the strange occurrences. His hypnotic voice lures her to the window and tells her everything she’s longed to hear—she’s beautiful and special, and he wants nothing more than for Aja to come with him. Aja knows she shouldn’t trust him, but she’s barely able to resist his enthrallment. And following him into the woods may be the only way to find Fiona, so she agrees on one condition: He must let her leave alive if she is not wooed after one week. Though Aja plans to kill him before the week is out, Padraic has his own secrets as well.

In the misty woods, Aja finds that Padraic has made his nest with another vampire in a dilapidated church infested by blood-sucking butterflies. Within its walls, the vampires are waited on and entertained by other children they’ve enthralled, but there is no sign of Fiona. Before her bargain is up, Aja must find a way to turn her classmates against their captors, find her sister, and save them all—or be forced to join the very monsters she wants to destroy.

DIREWOOD is an intriguing YA fantasy/horror about sisterhood and emotion. Aja is a younger sister to the completely perfect Fiona. She has a lot of feelings about it, quite complicated at heart, but she does care for Fiona deeply. Shortly after her birthday, Fiona disappears, and when Aja is approached by a deadly creature named Padraic at night, she bargains with him for a week when she will be safe in his realm, hoping to find her sister and destroy him before returning home.

However, once she travels with him through the deadly fog, she finds a strange church and the missing teens from her town who have been enthralled by Padraic and his fellow vampire, Kate. Finding the answers she needs and her sister seem more impossible than she imagined, as her own survival is anything but certain.

What I loved: This is a really atmospheric read that pulls the reader in at the start. Aja has always seen things a bit differently, and she recognizes the strange omens that everyone else brushes off. She has strong emotions regarding her sister, the town where she lives and their microaggressions, the feelings of importance that being the favorite give her, and complicated emotions around the other teens who have been enthralled. That feeling of wanting something more and to be better/more powerful is one that will resonate with teens and feeds into the reason why so many have gone with the vampires.

While Aja originally goes to find her sister, she begins to realize the things she did not know about her, understanding her better after she left than she had when they were together. The element of sisterhood lies underneath the surface of the story, but is a strong theme regardless. The truth of the vampires is not at all pretty, and Aja sees the flaws that those enthralled do not. There is an interesting element of what she experiences vs those around her that persists during the time there, making it seem dreamlike and endlessly mysterious. It all adds into the atmosphere of suspense/horror at what is happening and what has maybe happened to Fiona.

Aja is a compelling character who is beginning to understand who she is, what she wants, and more about the world around her. During her time with Padraic, she remains skeptical, while at the same time, though she wants to destroy them and return home quickly, she finds herself staying past her original plan. It all adds up into something that keeps the readers on their toes.

Final verdict: DIREWOOD is an atmospheric and enthralling YA horror/fantasy that pulls the reader into this mysterious world of vampires and the dark.

Your Heart My Sky
The Black Queen
Scaredy Bath
Yetis Are the Worst!
I Can't Draw
Twelfth Grade Night (Arden High #1)
Calix and the Fire Demon
Wolfstongue
The Infinite Questions of Dottie Bing
The Amarisian Prophecies: The Reckoning
Earth Reclaimed
The Lost Library
Salt and Sugar
Longevity: The Awakening
Tales of a Seventh-Grade Lizard Boy
Storm Chaser
Grave Things Like Love
The Empress of Time
Daughters of the dawn
Shoshi's Shabbat
Moo, Baa, Fa La La La La!
The Scrivener's Bones: Alcatraz vs. the Evil Librarians (Alcatraz Versus the Evil Librarians Book 2)
Our Day of the Dead Celebration
Our Little Mushroom: A Story of Franz Schubert and His Friends
The Christmas Clash
If Your Babysitter is a Bruja
Shady Baby Feels: A First Book of Emotions
Wait For Me
Unsolved Case Files: The 500 Million Dollar Heist: Isabella Stewart Gardner and Thirteen Missing Masterpieces (Unsolved Case Files, 3)
Squad Up (A Power Up Graphic Novel)